Teenage Hockey Player Dies After Being Hit by Puck 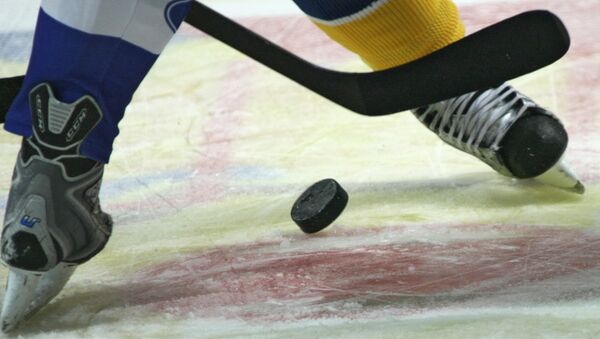 © Sputnik / Vladimir Fedorenko
/
Go to the photo bank
Subscribe
A 16-year-old Russian hockey player died Friday from injuries sustained in a match in the central city of Penza, Yulia Volkonitina, a spokeswoman for the local sports authority, told RIA Novosti on Friday.

A 16-year-old Russian hockey player died Friday from injuries sustained in a match in the central city of Penza, Yulia Volkonitina, a spokeswoman for the local sports authority, told RIA Novosti on Friday.

Maxim Koposov was hit in the chest by the puck while playing for local team Olimpia in a youth game on Saturday, and collapsed onto the ice. He fell into a coma, and never regained consciousness, she said.

“Thousands of people have supported Maxim and prayed for him all this time. Maxim was unable to wake up from a deep coma, and his heart stopped today. We extend our deepest condolences to his family and those close to him,” Volkonitina said.

“He fell over, then just stood up and carried on playing for a while, then fell again next to the bench. We thought it was really strange, then the doctor went up to him and started giving him CPR.”

The Rossia-24 channel said Koposov’s treatment had been delayed by the lack of an ambulance stationed at the Golden Puck ice rink.

“Max, why? Why have you left us? Enter the kingdom of heaven, you’ll always be in our hearts,” wrote Ksenia Luzyanina, from Koposov’s home town of Kirovo-Chepetsk.

Koposov’s death mirrored that of promising Russian hockey player Alexey Cherepanov, 19, who was tipped to join the NHL when he suffered a heart attack and died during a KHL match between his Avangard Omsk team and Vityaz Chekhov.