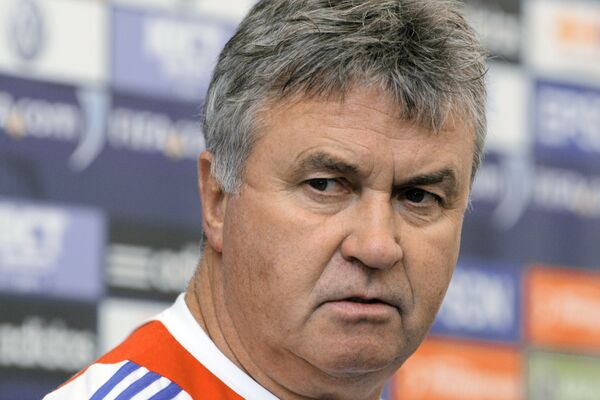 © RIA Novosti . Alexey Danichev
/
Go to the photo bank
Subscribe
Anzhi Makhachkala on Friday confirmed the signing of Dutch coach Guus Hiddink to an 18-month contract with the billionaire-run club from Dagestan.

Anzhi Makhachkala on Friday confirmed the signing of Dutch coach Guus Hiddink to an 18-month contract with the billionaire-run club from Dagestan.

A statement on the club's website said Hiddink would also act as Anzhi's vice president, which would appear to give the 65-year-old Dutchman complete control over transfer policy.

"FC Anzhi welcomes Guus Hiddink to the club and wishes him success in his work!" the statement said. There was no word on the value of the contract, which Dutch media earlier reported to be at least 10 million euros a year.

Hiddink was quoted by the website as saying that negotiations with Anzhi had begun late last year.

"I'm very glad to have the possibility not only to work in a football team, but to work with friends who have invited me here."

"I especially appreciate the fact that the club is building serious plans to develop football in the region - this is no less important than the results on the field and I intend to give this matter special attention."

Hiddink said he had spoken with billionaire owner Suleiman Kerimov directly about the post.

"From our conversation I became confident about the scale of the project I've been invited into. I know about the ambitions of the investor, the club and the supporters, the whole world knows about this already, and I will do my utmost to ensure that the club's game lives up to these ambitions.

Kerimov fired Hiddink's predecessor Yuri Krasnozhan last week. The former Lokomotiv Moscow coach had been in the job only two months and was yet to oversee a competitive match.

Fabio Capello had been linked with the vacant post at Anzhi since resigning as England coach earlier this month.

Hiddink, who was linked to the England job, is best known for getting the South Korean national side to the semifinals of the 2002 World Cup, Russia to the quarterfinals of Euro 2008, and helping Australia reach and progress to the knockout stages of their first-ever World Cup in 2006.

Since Kerimov bought Anzhi, previously a modest club, in January 2011, he has rocked the football world by persuading superstars such as Brazil’s Roberto Carlos and Cameroon’s Samuel Eto’o to come and play in Russia, hardly one of Europe’s glamour leagues.

The Dagestan-born businessman has shelled out world record wages for the acquisitions, paying Eto’o a reported 20 million euros a year.

Kerimov is notorious for wanting quick success and fired the first coach he appointed, Gadzhi Gadzhiev, in September despite his anchoring the club in mid-table, far above any previous achievements.

Hiddink will be expected to secure some form of European qualification for Anzhi, currently in seventh and 13 points off Zenit St. Petersburg’s lead.

With 14 games remaining, Anzhi could still qualify for the Champions League. They are six points adrift of Dynamo Moscow, who occupy the last of three qualification slots.

Krasnozhan was reported in the Russian press to have fallen out with Kerimov over Roberto Carlos' influence over team affairs.