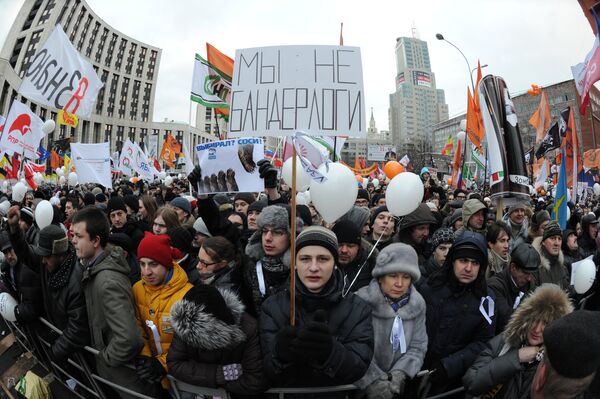 Liberal political reforms proposed by outgoing President Dmitry Medvedev after the mass protests in December are to be rolled back, the Gazeta.ru news portal said Friday.

The presidential approval for the selection of candidates for governor will be mandatory, there will be an increase in the minimum number of members for individual parties to register, and changes to the electoral system for the State Duma will be less far-reaching, the report said, citing the latest changes to the draft bills submitted by Medvedev and now reviewed by the State Duma.

The presidential 'filter' would give the Russian president the power to pick and choose what politicians can take part in regional gubernatorial elections.

The idea was first discussed by Vladimir Putin during a televised chat with the nation, when he promised a return to direct elections for regional governors after tens-of-thousands of people took to the streets in protest demonstrations. Critics argued that this would still give the president too much control over the selection process.

The protest rallies followed December 4 parliamentary elections, which organizers claim had been rigged in favor of the Putin's ruling United Russia party.

Later, President Medvedev promised sweeping political reforms, including the popular election of governors without any presidential filter, during his televised state-of-the-nation speech in late December.

However, in February Putin reiterated that a presidential filter would be required, speaking at the Forum of the Peoples of Southern Russia on January 25.

After that came the decision of the State Duma Committee on Constitutional Legislation and State Building to recall the bill of reforms for a second reading and to include a mandatory consultation with the Russian president before nominations are put forward for the election of regional governors.

Political analyst Alexei Makarkin told Gazeta.ru that "[presidential] consultations may be just a psychological filter because the current system is unlikely to risk the party and directly disagree with the president." However, he notes, if more political parties take part in Russian politics, many will be in the regional parliaments, which will make presidential consultations an extremely time consuming task.

Electoral reforms are also not to be as far-reaching as expected, "the main winner from the reforms in the formation of the Duma will be United Russia... The other parties will find it difficult to recruit the numbers required to be effective, this will be a major disadvantage to small parties, which have their own offices in the regions and, although able to register and participate in elections under the new legislation will not be able to establish a significant presence," said the Professor of the Department of Political Science and Sociology at the European University at St. Petersburg, Gregory Golosov.