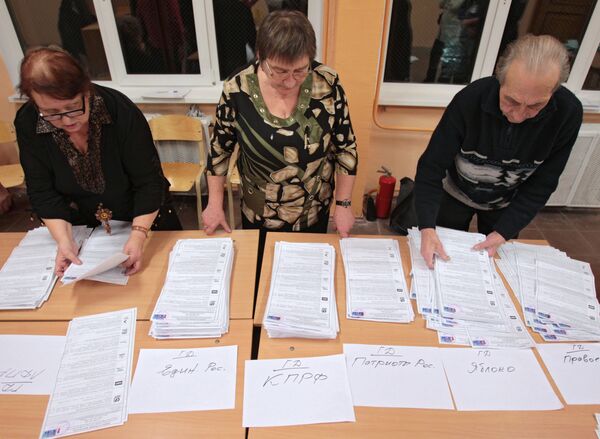 Two women who say they defied orders to rig December’s parliamentary elections in favor of Prime Minister Vladimir Putin’s United Russia party said on Thursday they were being intimidated by the authorities.

Two women who say they defied orders to rig December’s parliamentary elections in favor of Prime Minister Vladimir Putin’s United Russia party said on Thursday they were being intimidated by the authorities.

Irina Kolpakova, the former head of a polling station in the Volga city of Samara, said there had been attempts to “fabricate” a criminal investigation against her after she spoke out on the video-sharing site YouTube earlier this month.

“It is a very stressful situation for me,” Kolpakova said at the central Moscow offices of the independent Novaya Gazeta newspaper.

Prosecutors in Samara, some 1,000 kilometers southeast of Moscow, confirmed an investigation was underway but did not elaborate.

Public anger over suspected vote-rigging has developed into the biggest anti-government rallies seen in Russia since Soviet times. Protesters’ demands include a rerun of the polls, electoral reform and the dismissal of the country’s election chief, Vladimir Churov, who they say is responsible for the alleged fraud.

The Kremlin admitted there had been minor violations to the poll and have brought charges in a number of cases.

In the video, Kolpakova said officials in Samara had been instructed to deliver a landslide majority for United Russia at the December 4 polls, and detailed means of electoral fraud.

She said on Thursday electoral heads remain under “colossal pressure” by the authorities ahead of next month’s presidential polls at which Vladimir Putin is expected to secure a third stint in the Kremlin.

She also suggested that Putin may not be personally behind the falsifications and urged him to order his inferiors to stop the “damaging work” dragging his ratings down.

Tatiana Ivanova, a school teacher who was the head of a polling station in central St. Petersburg at December’s polls, said she was being tried for libel after she accused the district’s education chief, Natalia Nazarova, of presiding over widespread electoral fraud.

She added, however, that she had no fear and was determined to continue the fight for fair elections in Russia.

“You only need to say ‘No’ to them once and it will become much easier for you,” she told the downtown Moscow news conference.

Ivanova, who resigned from the school after the elections, said some of her friends and former co-workers “moved away” from her after she refused to fix the elections.

“I can’t say they are against me, they have sort of dissociated themselves from me. They said to me, ‘Sorry, but I need this job’,” she said.

The vote-rigging protests in Moscow and dozens of other cities led to a pledge by outgoing President Medvedev to reform electoral law and investigate the alleged fraud.

But Ivanova said on Thursday that “nothing has changed.”

“It’s that genetic fear. People are afraid of having their say. They are not certain they can achieve what they want,” she said.

Both Ivanova and Kolpakova said the use of web-cameras at polling stations, proposed by Putin during his annual televised phone-in show in December, would not prevent fraud at the March 4 elections.

“You just have to do your job honestly, that’s all,” Kolpakova said. “It’s laughably simple.”