Advocaat – I Wanted to Play England 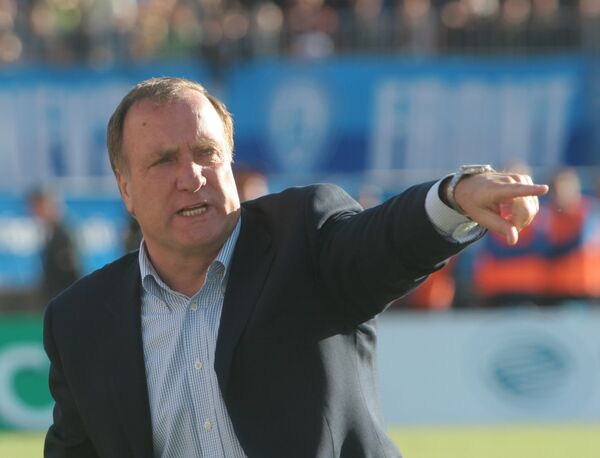 Russia coach Dick Advocaat wanted to play a friendly with England in the run-up to Euro 2012, he said Thursday.

Russia coach Dick Advocaat wanted to play a friendly with England in the run-up to Euro 2012, he said Thursday.

Russia will play Denmark later this month and then Lithuania, Uruguay and Italy to prepare for the tournament, which starts June 8 in Poland and Ukraine.

“Probably, the option with England would have been interesting,” Advocaat told the Russian Football Union website. “But our final choice settled on the opponents you already know about.”

Russia will play the Czech Republic on the opening day of the tournament, after the first game between Poland and Greece, who are also in Russia’s group.

Asked if Russia had chosen the correct opponents to prepare for the tournament, Advocaat said: “I think so, yes. However, only the Euro result will give us an unambiguous answer whether we made a mistake with our sparring partners or not.

“On the subject of Italy and Uruguay, they’re very strong teams. Matches with them will help us to prepare well for the Euros.”

Russia beat England 2-1 during qualifying for the 2008 European championships.

Advocaat said that the team would be helped by the return to Russia of striker Roman Pavlyuchenko and winger Diniyar Bilyaletdinov.

“Their return is a plus for the Russian championship and the national team. A plus for the footballers themselves, who will now get significantly more match practice. That’s very important to us.”

He also praised the performances of Zenit St. Petersburg, who beat Benfica 3-2 in their Champions League first-leg tie on Wednesday.

“I can only compliment the Zenit players. Well done to the lads, they showed character and a drive for victory.”

Russia are chasing their first European Championship win since the inaugural tournament in 1960 and are currently ranked 13th in the world and the 9th-best European team.