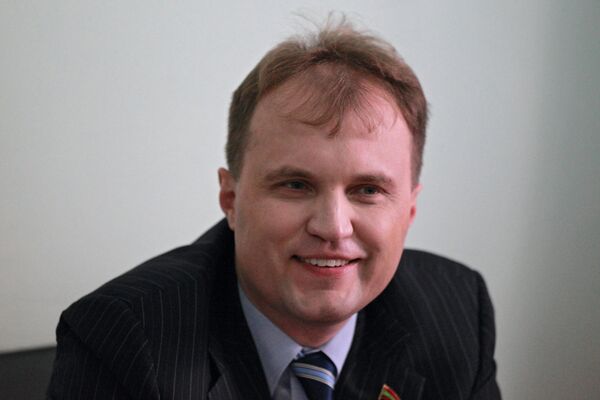 The breakaway Moldovan province of Transdnestr is considering introducing the Russian ruble as its second official currency, said the region’s president Yevgeny Shevchuk.

The breakaway Moldovan province of Transdnestr is considering introducing the Russian ruble as its second official currency, said the region’s president Yevgeny Shevchuk.

The measure will help Transdnestr businesses when dealing with companies from the Customs Union of Russia, Belarus and Kazakhstan, Shevchuk said in an interview published late Wednesday by local news agency Olvia-Press.

The unrecognized republic requested that it be accepted into the Customs Union as an observer last year; however, the request was not reacted upon.

Shevchuk did not elaborate on the timeframe for the move beyond saying that it may happen “in the short term.” The introduction of the Russian ruble would not mean that the region is giving up on its own currency, the Transdnestrian ruble, Shevchuk added.

Transdnestr, which heavily relied on Russian economic support ever since declaring independence in 1990, first voiced plans to introduce the Russian ruble as its second, or even first, currency in 2006, but the idea was never implemented.

Shevchuk, who defeated the longtime ruler of Transdnestr, Igor Smirnov, at landmark elections in December, announced earlier this month that most of republic’s funds have mysteriously disappeared, with only $49,000 remaining in its accounts. Russia also froze a $300-million credit line to the region after its preferred candidate lost the presidential race.