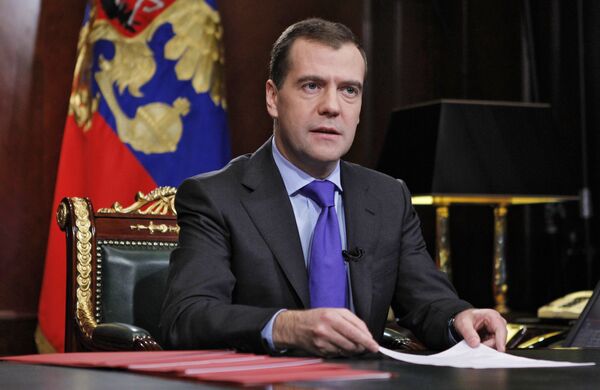 On Wednesday, at a meeting with heads of registered parties the Russian President said that he intended to submit a draft law on parliamentary elections to the State Duma.

In accordance with the President’s proposals, 225 election districts will be organized in Russia. Earlier, it was reported that the districts were to be approved by the CEC for at least more than one election cycle.

In his speech to the Federal Assembly in December, Medvedev suggested introducing proportional representation for the 225 districts in the Duma "to enhance communication between deputies and the electorate". Currently, some regions do not have a single representative in the parliament and the introduction of the districts would allow "each territory to have their own direct representative in the parliament," the President said.

Earlier, the President submitted three bills to the Duma, one of which gives Russians the right to choose heads of their regions directly for up to five years, political parties can nominate their candidates for governors. The other bill simplifies the procedure for registering political parties. The third bill reduces the number of signatures required to participate in elections for non-parliamentary parties and self-promoted candidates. The State Duma will consider all three of these initiatives at an extraordinary meeting on February 28. Non parliamentary parties will also participate in the meeting.