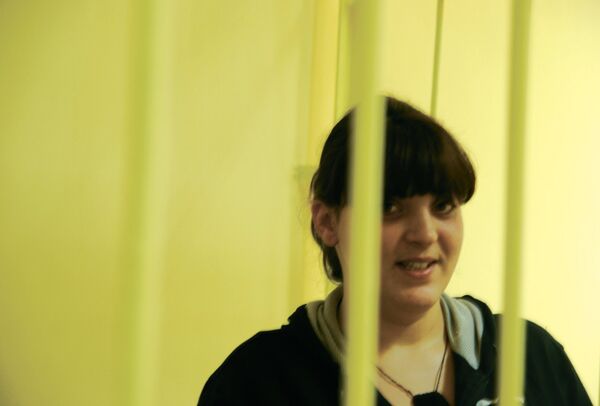 A court in Russia’s Smolensk region cancelled the ten-year sentence of opposition activist Taisiya Osipova, who was jailed on drug charges, following President Dmitry Medvedev’s promise “to personally look into the case.”

A court in Russia’s Smolensk region cancelled the ten-year sentence of opposition activist Taisiya Osipova, who was jailed on drug charges, following President Dmitry Medvedev’s promise “to personally look into the case.”

Osipova, a diabetic mother of a five-year-old girl, was jailed for 10 years in Smolensk in late December. Her supporters insist the case was fabricated by police as leverage against her husband, Sergei Fomchenkov, a senior member of an unregistered party, Other Russia.

The court on Wednesday cancelled Osipova’s sentence stating the evidence against her had not been proven and filed her case to be for reinvestigation, RIA Novosti reported.

During the trial, prosecutors demanded her jail term be cut to four years since Osipova is mother of a five-year-old girl.

Medvedev, who visited a Journalism faculty of the Moscow State University in late January, pledged to take the high-profile case under his control.

Osipova was included in the opposition-backed list of 39 Russian political prisoners who should be freed. The list was submitted to the presidential administration on February 8 by an opposition journalist Olga Romanova and State Duma member Gennady Gudkov.

“I guess our judicial authorities will guide Osipova through the hell of writing an appeal to be released on parole…and will release her just ahead of the presidential inauguration,” Romanova told RIA Novosti.

Romanova also said that Osipova, who earlier ruled out the possibility to plead for a pardon, as she denies her guilt, must know that her reputation would not be marred even if she had asked for pardon.

Osipova, 27, made headlines back in 2003 for smacking then-governor Viktor Maslov in the face with a bouquet of carnations in protest of his policies, which earned her a one-year suspended sentence. She left active politics around 2008 to look after her daughter and household.

In 2010, police found nine grams of heroin at Osipova’s house in Smolensk. However, her supporters insist the search was conducted with multiple violations and the key witnesses for the prosecution are members of pro-Kremlin youth groups involved in crackdowns on the opposition, which undermines their credibility.