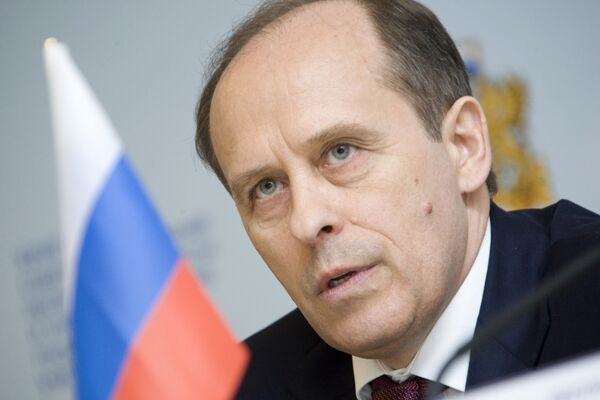 © RIA Novosti . Pavel Lisitsyn
/
Go to the mediabank
Subscribe
International
India
Africa
The number of terrorism-related crimes in Russia halved to 365 in 2011 from 779 in 2010, the head of Russia's Federal Security Service (FSB) said Wednesday.

The number of terrorism-related crimes in Russia halved to 365 in 2011 from 779 in 2010, the head of Russia's Federal Security Service (FSB) said Wednesday.

“The actions of the National Anti-terrorism Committee contributed to the decrease of the terrorist activity in Russia,” Bortnikov said, adding that the number of terrorist crimes that include apart from terrorist attacks, diversions and attacks on law enforcers, fell to 365 in 2011 from 779 in 2010.

Bortnikov said that a number of notorious terrorist attacks had been uncovered, including a deadly blast in Moscow’s Domodedovo airport in January 2011, the attack on the Baksan hydropower plant in Kabardino-Balkaria in July 2010 as well as several attacks on police officials.

The Head of the Security Service also said that there are special centers in the North Caucasus republics that help former criminals to adapt to a life outside of terrorism.

“Forty-nine people have been convinced to quit terrorist activity,” Bortnikov said, adding that the anti-terrorism commission was currently working with over 90 people.

The FSB chief also said that almost 50 gang leaders, including two Al Qaeda envoys were eliminated in the North Caucasus in 2011.

Russia has been fighting militants in the North Caucasus for over a decade, including two separatist wars in Chechnya.