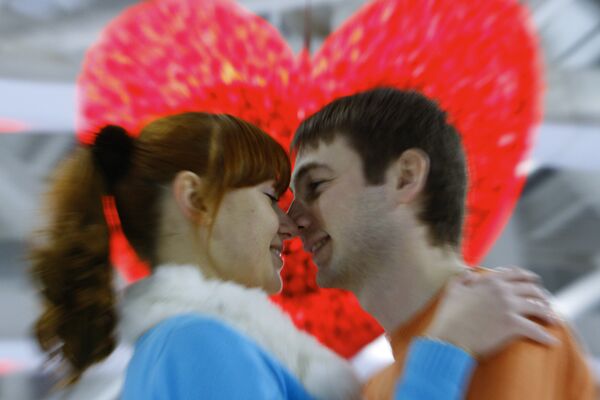 Western popular culture has deeply taken root in Russian society since the fall of the Iron Curtain, yet St. Valentine’s Day celebrations have more opponents than supporters among Russians, the Superjob research center statistics show.

According to a recent public poll conducted by the organization, only 39 percent of Russians, most of them youngsters under the age of 24, are planning to celebrate the holiday, while 44 percent said they were not going to.

When asked why not to present a Valentine gift or a card to their partner, many Russians say “our culture does not benefit from foreign holidays,” with 35 percent admitting that they prefer to mark the Day of Family, Love and Faithfulness, a Russian alternative to St. Valentine's Day, on July 8.

Russia introduced the holiday, also known as the Day of St. Peter and St. Fevronia, the Orthodox patrons of marriage, in 2008. First lady Svetlana Medvedev is among the most active promoters of the new holiday, with a daisy being its symbol instead of a red heart.

Many Russians view Women’s Day on March 8 and Men’s Day on February 23, which have been celebrated in Russia for decades, as more suitable days for gifts and celebrations than St. Valentine's Day, the poll shows.

Yet the number of those who are going to celebrate the holiday has slightly increased from 37 percent last year. A romantic dinner, a bunch of flowers and fluffy toys are among the most popular presents to mark the holiday, while a few Russians, who appear to be more creative, say they are going to present a lottery ticket, a poem or a pet to their beloved ones.