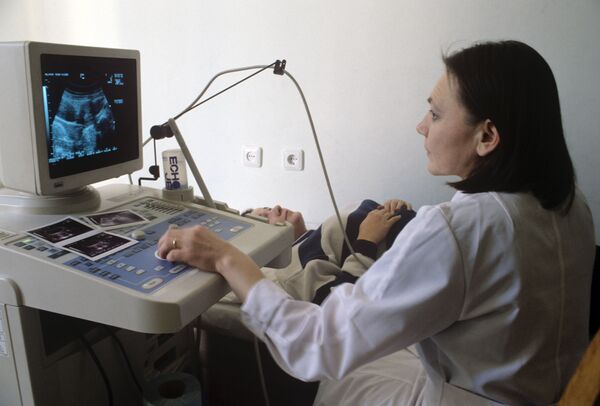 © RIA Novosti . A.Solomonov
/
Go to the mediabank
Subscribe
International
India
Africa
The Russian Health Ministry has cut the list of social grounds that allow women to have a free abortion, which leaves sexual assault as the only excuse for women to abort their pregnancy.

The Russian Health Ministry has cut the list of social grounds that allow women to have a free abortion, which leaves sexual assault as the only excuse for women to abort their pregnancy.

“A pregnancy which occurs after sexual assault, is a social reason for a woman to have an abortion,” the Health Ministry said in a statement.

Other social factors that would have qualified a woman for a free abortion were; if there was a court decision to relieve a woman of her parental rights, if a woman was in jail, or if a father became disabled or died during a woman's pregnancy.

Among the medical factors that give Russian women the right for a free abortion are AIDS infection, oncology, an active form of tuberculosis, grave genetic diseases and other health problems threatening a woman’s life.

There are both state-run and commercial clinics that carry out abortions in Russia. The former offer free services in case a woman has social or medical factors that need to be taken into account, while the latter allow women to have an abortion even if they do not qualify for a free one.

According to the United Nations Population Division, abortions are legally allowed in 55 out of 194 countries.

More than 1 million Russian women have abortions every year, which makes the ongoing demographic crisis in the country even worse.

The 2010 census showed that Russia's population dropped from 145 million in 2002 to under 143 million, with the death rate continuing to exceed the birth rate despite government efforts to encourage Russians to have more children.

The parliament may soon pass a new anti-abortion bill that could limit access to abortion services and toughen criminal punishment for doctors who carry out illegal abortions.