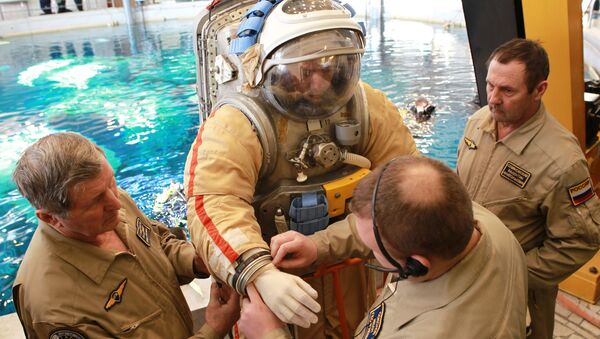 Only 43 people applied for the first open cosmonaut selection drive in the history of the Russian space industry a month before the deadline, recruiters said on Tuesday.

Only 43 people applied for the first open cosmonaut selection drive in the history of the Russian space industry a month before the deadline, recruiters said on Tuesday.

“It’s tough work to sit on 300 tons of explosives and ascend there,” Vitaly Davydov, deputy chief of the Federal Space Agency, said at a press conference in Moscow.

“Health of the space industry reflects health of the country in general,” said Sergei Krikalev, head of the Yuri Gagarin Cosmonaut Training Center.

Rumors that the new cosmonauts would be preparing for a flight to the moon are untrue, but they will have a chance to participate in an extended mock Mars mission in orbit lasting up to a year, said Alexei Krasnov, who supervises manned spaceflight programs at the Federal Space Agency.

The open selection drive was launched on January 27 and runs until March 15. Of the current applicants, 27 work in the space industry, traditionally the main source of cosmonauts, Krikalev said.

But the list also includes applicants from other professions, including an airline pilot and three army officers, he said. There are also seven women among the applicants, Krikalev, 53, said.

By comparison, an ongoing NASA recruitment drive had about 6,000 applicants, some 1,000 of them female.

Not all applicants were serious. One applied because he lived close to the cosmonaut training center and wanted to save time on commuting, while another sought to leave documents on his mental health out of his paperwork, Davydov said.

Recruiters expect more applications to flow in because contenders need to provide a handful of medical and other documents, the collecting of which takes time, said Krikalev, a cosmonaut who holds the world record for combined time spent in orbit with 803 days in six flights.

To Be a Cosmonaut

To be eligible, applicants need to be no older than 33, graduate from college and have at least five years of work experience, as well as fit meticulous physical requirements such as height when seated (80 to 99 centimeters).

Participation is not limited to technology aficionados. “A person with a background in humanities has the chance of going to space, provided he can master space technologies well enough,” Krikalev told RIA Novosti on the sidelines of the conference.

Only four passed the first stage of selection as of Tuesday, Krikalev said. The Federal Space Agency expects to select five or six potential cosmonauts in the recruitment drive.

Further selection stages include one-on-one psychological checks, physical tests, exams to measure the contenders’ learning abilities and a month-long medical examination. Those who pass, enter the cosmonaut preparation program, which takes no less than six years to finish, meaning that the applicants would not fly into orbit until at least 2018.

The job is demanding, but not a lucrative one, with the monthly salary for a top-grade cosmonaut standing at around 70,000 rubles ($2,300), Krikalev said.

“It pays better to work as a porter,” he said, adding that one of the prime criteria for selection was motivation to go into space.

The long-term goal of Russian and global space research is to go beyond working in low Earth orbit and, ultimately, stage a manned flight to Mars, said Krasnov of the Federal Space Agency.

To prepare for this, the agency is considering sending people into orbit for more than a year in completely autonomous spacecraft, which would allow testing and perfecting technologies for a possible trip to Mars, Krasnov said.

He avoided giving a timeframe for an actual Mars flight, but said the long trips to orbit would be based on the Mars-500 experiment, wrapped up last year, which saw a crew of six locked up in a facility in Moscow for 520 days in a simulated Mars trip.

The current record for continuous stay in space belongs to Russian Valery Polyakov, who spent 437 days in orbit in 1994-1995.

Russia will also be investing more in unmanned space flights but not to the detriment of manned expeditions, the funding for which is increasing, Davydov said.