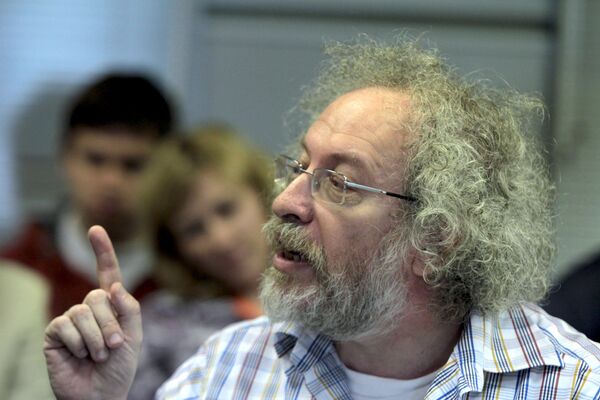 © RIA Novosti . Valery Malnikov
Subscribe
Russian liberal radio station, Ekho Moskvy, announced on Tuesday significant reshuffles under which its chief editor Alexei Venediktov and his first deputy, Vladimir Varfolomeev, were removed from the board of directors.

Russian liberal radio station, Ekho Moskvy, announced on Tuesday significant reshuffles under which its chief editor Alexei Venediktov and his first deputy, Vladimir Varfolomeev, were removed from the board of directors.

Venediktov, one of the founders of the Ekho Moskvy radio station, wrote on Tuesday on his Twitter: “Gazprommedia (which holds 66 percent of Ekho Moskvy’s shares) urged the early dismissal of the radio’s board of directors and a change in independent directors.”

“Journalists and shareholders of the radio station express their concern with this decision…since the annual meeting of the board of directors where the board’s head may be changed, is scheduled for June,” Venediktov said on the Ekho Moskvy website.

He however ruled out his dismissal as the editor-in-chief, saying that the radio’s editorial policy, which is famous for critical comments about Prime Minister Vladimir Putin, will not change.

Venediktov’s removal from the radio’s board of directors comes a month after his dialogue with Putin at a meeting with Russian media directors. The prime minister then slammed Venediktov’s radio shows as “serving foreign policy interests of one state with regard to another, Russia.”

Then the premier continued by saying: “As for me, I’m not offended when you sling mud at me from dawn to dusk…I’ve just said two words and you got offended.”

Putin’s spokesman, Dmitry Peskov, ruled out on Tuesday that Venediktov’s dismissal was linked to criticism of Putin.

“It is likely to be internal corporate affairs…It cannot be connected with the radio station’s criticism of Putin,” Peskov said.

Russian political and media experts are divided over the reshuffles in Ekho Moskvy.

“I suspect it’s just the beginning (of further actions against critical media)…Venediktov later may be dismissed from his editorial post too if the radio’s content does not become more pro-Kremlin,” the head of Russia’s Panorama political think tank, Vladimir Pribylovsky, said.

The head of Business FM radio station, Mikhail Berger, said that “there is no tragedy” in this move since “neither the board of directors, nor the shareholders…have significant influence on the radio’s content.”

Berger said that the radio’s owner, Gazprommedia, a company affiliated with the Kremlin, chose bad timing for this decision since any reshuffles in media can be regarded as politically motivated ahead of the presidential elections scheduled for March 4.