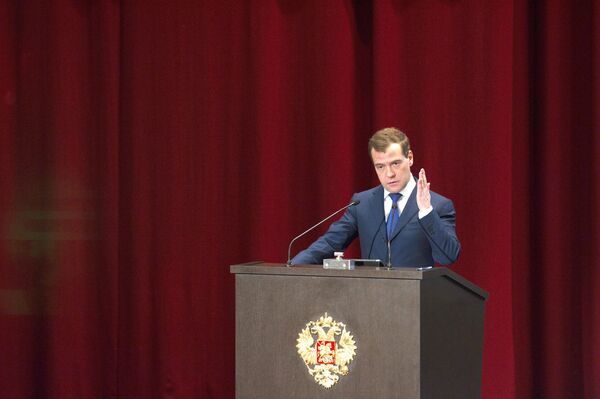 © RIA Novosti . Sergey Guneev
/
Go to the photo bank
Subscribe
President Dmitry Medvedev praised the reformed police while urging them to follow through on journalist investigations and voter complaints, as well as refrain from “hysterics.”

President Dmitry Medvedev praised the reformed police while urging them to follow through on journalist investigations and voter complaints, as well as refrain from “hysterics.”

“The drift toward change is evident, and I think what was done last year and in recent years had a positive effect,” Medvedev said on Friday in Moscow at a meeting to discuss results of the police reform.

Medvedev last year launched a sweeping reform of the 1.2-million-strong police force, notorious for corruption and abuse of authority. Some 200,000 officers were purged after reevaluation tests, salaries were raised and the force’s title was changed from the Soviet-era “militia” to universal “police.”

More change will follow, but not until the Interior Ministry gets used to its new structure, Medvedev said. “You can’t shake the structure like a pear tree,” he said.

He also demanded officers to track crime reports online, investigate rampant corruption in the utilities industry and react immediately to reports about electoral violations – an implicit reference to December’s parliamentary elections, which were fraught with allegations of massive vote fraud. Most reports were thrown out by courts.

“You’ve got to react to journalistic investigations even if they’re sometimes too hard-hitting because they often expose outrage that the public is concerned with,” Medvedev also said.

He did not give any examples. However, prominent daily Kommersant this week accused several state officials of having staged a cyberattack on its website in 2008 and discussed it in emails that were leaked online by anonymous hackers. Police refused to investigate the incident at the time.

“There’s no place on the police force for hysterics and personal PR,” Medvedev also said. He named no names, but sacked on Friday the chief of St. Petersburg's police, Mikhail Sukhodolsky, who was involved in a public spat with Interior Minister Rashid Nurgaliyev.

Sukhodolsky, tipped by media as Nurgaliyev’s potential successor, earlier tried to stop an extensive check of his department, warning that it may “destabilize” police work in St. Petersburg.

Success of the police reform remains mixed. A poll of 41,500 held by state-run VTsIOM last fall showed 52 percent trusted the police, up from 33 percent in 2009. But a separate study by independent Levada Center in November, which polled 1,600, indicated that only 6 percent thought the force was improved by the reform, while 75 percent saw no change.

Police improved in the few regions that actually weeded out bad cops, but not nationwide, said Asmik Novikova, a police researcher with the Public Verdict independent foundation.

This is because the reformers put no thought into changing structure, management and evaluation rules of the force, which still plans in advance how many crimes it must solve each year, Novikova said.

“It’s the same rusty old organization with a planned economy,” she said by telephone on Friday.