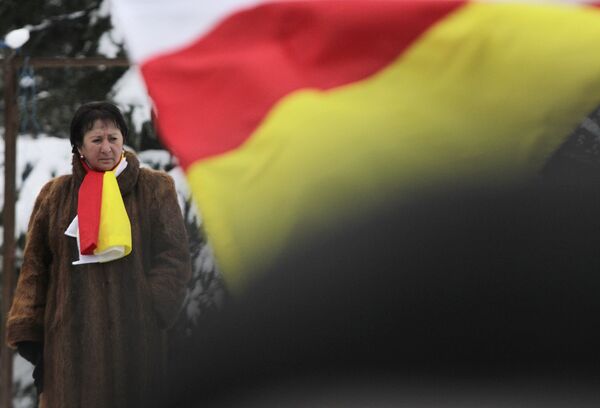 Controversial South Ossetian opposition leader Alla Dzhioyeva, who reportedly suffered a stroke after being detained on Thursday, has regained consciousness and is in moderately grave condition, Mairbek Kokoyev, the chief doctor of the regional hospital, said on Friday.

Controversial South Ossetian opposition leader Alla Dzhioyeva, who reportedly suffered a stroke after being detained on Thursday, has regained consciousness and is in moderately grave condition, Mairbek Kokoyev, the chief doctor of the regional hospital, said on Friday.

“She is in a moderately grave condition. She is fine, orientated and conscious,” Kokoyev said adding that her relatives, including her husband and a brother, are visiting her.

A group of six doctors, he said, diagnosed her with hypertensive crisis, which implies a critically high level of blood pressure and could have resulted in irreversible organ damage, Kokoyev said.

They said that Dzhioyeva needs to undergo CAT-scan in neighboring North Ossetia, but her husband and brother spoke against transporting her to another hospital, including to Moscow.

The doctors also said that after a detailed medical examination of Dzhioyeva, they found no bruises, grazes or any other external injuries on her body.

Violetta Dasaeva, an assistant to Dzhioyeva said earlier the politician was brutally beaten during her detainment.

“We were working at our headquarters when special police forces in masks broke in," Dasaeva told Komsomolskaya Pravda radio on Thursday.

"They started kicking Alla Alekseevna [Dzhioyeva], hitting her with a rifle butt…They grabbed her like a cat, tied her feet and arms and threw her into the car,” Dasaeva told the radio station, adding that Dzhioyeva’s husband and son had also been beaten.

Dzhioyeva, who won a disputed presidential vote last November, was hospitalized on Thursday when law enforcers tried to take her into custody for questioning on coup attempt charges.

South Ossetian prosecutors claimed that the opposition leader was summoned for questioning as an eyewitness in an attempt to seize the Central Election Commission’s building late last year.

Dzhioyeva, an anti-corruption crusader, scored an unexpected win over Anatoly Bibilov, Russia’s favored candidate, in a runoff vote in November’s presidential elections in the Georgian breakaway territory of South Ossetia.

However, the region’s Supreme Court declared the results invalid after Bibilov accused Dzhioyeva of vote-rigging and barred her from the March elections. She in response denounced the ruling and declared herself president.

In an interview with the Russian Kommersant business daily prior to her arrest on Thursday, Dzhioyeva said that she expected provocation from the security services on the day of her inauguration.

“There is a pressure from all around - informational, psychological. Everybody is talking about worsening situation, bloodshed. And we are peacefully sitting and preparing for the inauguration,” Dzhioyeva told the daily.

The political situation in South Ossetia aggravated soon after the 2008 Russia-Georgian brief war when Georgia attacked South Ossetia to bring it back under Tbilisi's central control. After the war, Russia recognized the independence of South Ossetia and another ex-Georgian republic, Abkhazia.

President Dmitry Medvedev once has called South Ossetia “a zone of privileged interests” for Russia.