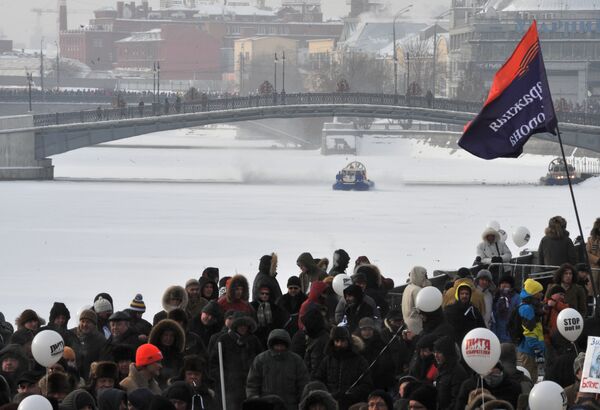 The new opposition event could see 34,000 lining up around the Garden Ring in downtown Moscow to “encircle the Kremlin” on February 26, organizers said on Facebook.

The new opposition event could see 34,000 lining up around the Garden Ring in downtown Moscow to “encircle the Kremlin” on February 26, organizers said on Facebook.

The event’s page on Facebook bills it as a follow-up to this winter’s three mass protest rallies in Moscow, each of which gathered tens of thousands. Some 800 registered for the new rally as of Thursday evening.

Organizers said 34,000 would suffice to cover the entire 16-kilometer Garden Ring. They did not elaborate on whether the human chain would block all road intersections along the road or what to do if more than the required number of people show up, but said participants would be able to pick up the part of the road to line up at in advance on the website 26feb.ru, which was down on Thursday.

The organizing committee for previous rallies praised the idea, but said it may yet propose an alternative format for the event, which is the last day of the folk holiday Maslenitsa, or Pancake Week, traditionally celebrated by consuming huge amounts of pancakes.

Anti-government protests in Russia were triggered by the parliamentary elections in December, which opposition groups say were marred with allegations of widespread rigging. The protesters demanded a repeat election, but the government ignored them, though it launched a sweeping reform to liberalize political legislation.

A pro-governmental rally will take place in downtown Moscow on February 23. Organizers said up to 200,000 would show up, and Prime Minister Vladimir Putin “did not rule out” that he may show up, his spokesman said on Thursday.

A previous pro-Kremlin event on February 4 gathered between 80,000 and 140,000, according to various estimates, though media claimed many were state employees forced to attend.

A co-organizer of the protests, Sergei Udaltsov, said he and his supporters may attend the pro-government rally to “explain their position” to participants.