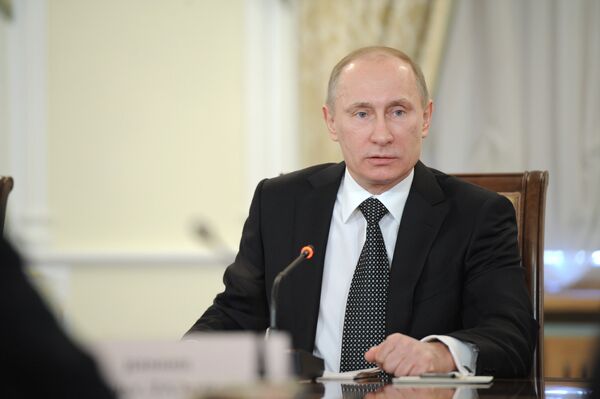 Russia condemns the ongoing violence in Syria but is against outside interference, Prime Minister Vladimir Putin said on Wednesday.

Russia condemns the ongoing violence in Syria but is against outside interference, Prime Minister Vladimir Putin said on Wednesday.

"We certainly condemn all violence wherever it comes from. However, you cannot act like a bull in a china shop," he said.

Other countries may help and advise Syria “but not interfere under any circumstances,” he said.

“The [Syrian] people must decide their future themselves.”

Russia is concerned by “a cult of violence” that has been taking center stage in international affairs over the past decade.

"We should not let anything like this happen in this country,” he said.

Russian Foreign Minister Sergei Lavrov earlier in the day called on the Arab world, the United States and Europe to refrain from passing judgment on the national dialogue in Syria that Moscow had pledged to assist.

Meanwhile, White House Spokesman Jay Carney said Russia “must realize that betting everything on Assad is a recipe for failure - not just for Russia’s interests in Syria, but for the stability of the region and for Syria’s future.”

Russia and China on Saturday vetoed a UN Security Council resolution on Syria that calls on President Bashar al-Assad to step down.

Thirteen of the council’s 15 members voted in favor of the resolution aimed to stop the violence in Syria.

Russia, one of President al-Assad’s firm supporters during the uprising against his regime, indicated earlier this week that it would veto the draft resolution calling on Assad to step down. Moscow has proposed its own draft, which the West criticized as being too soft.