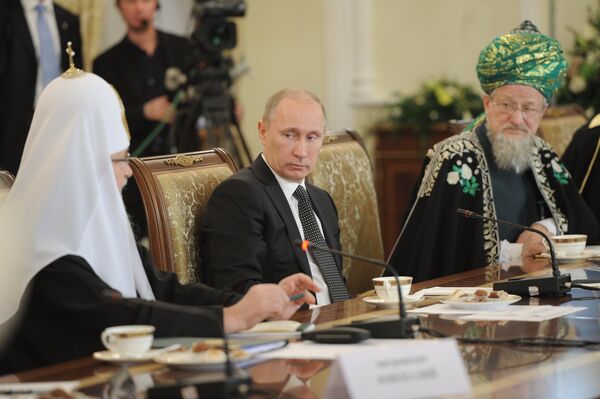 © RIA Novosti . Yana Lapikova
/
Go to the photo bank
Subscribe
Prime Minister Vladimir Putin came out in favor of robust religion and secular ethics classes in Russian schools, saying they should be taught by theology specialists or priests.

Prime Minister Vladimir Putin came out in favor of robust religion and secular ethics classes in Russian schools, saying they should be taught by theology specialists or priests.

The classes conform with the Constitution’s stipulation that Russia remain a secular state and are consistent with Putin’s commitment, reaffirmed last December, to preserving and strengthening the secular character of the Russian state, a point the government has been keen to uphold given the multi-cultural makeup of the population.

Students may choose to study the history of one of the four traditional religions - Orthodox Christianity, Islam, Judaism and Buddhism - or more general courses on “basics of world religious cultures” or “basics of secular ethics.”

Putin said the lessons must not turn into pro forma exercises. “They should be taught by well-trained people, either by theology teachers or priests,” Putin said at a meeting with representatives of traditional confessions in Russia on Wednesday.

The premier said that the pilot program of religious classes in 2009-2011 received a favorable response. The courses involved half a million children, 20,000 teachers and 30,000 schools across the country.

The prime minister also said that religious educational establishments must have the same rights as public schools, including rent issues, access to state budget means and teachers’ wages.

In addition Putin, who is running in the March 4 presidential election, said there must be no preconditions for governmental interference in religious activities.

“We do not intend to interfere in the activities of religious organizations. The state will not do this under any circumstances. That also goes for the self-organization within our religious communities,” Putin said.

Archbishop Ilarion of Volokolamsk, the head of the Moscow Patriarchy's foreign church relations, told Putin about the persecution of Christians abroad, particularly in Iraq, Egypt, Pakistan and India, and asked the premier to make the issue a Russian foreign policy priority if he wins the presidency.