Zhirinovsky Explains why He Swatted Ass 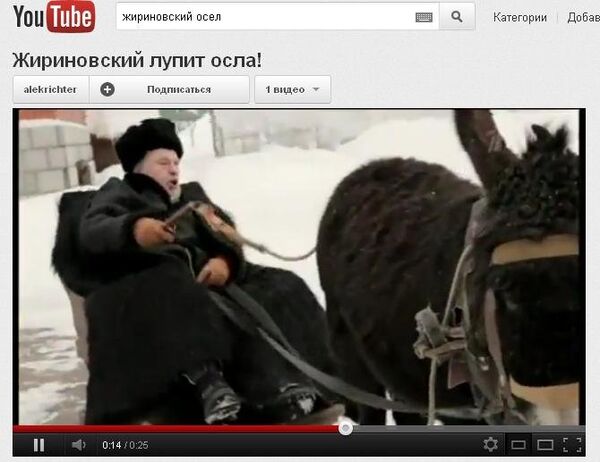 The video in which Zhirinovsky is sitting in a sled and swatting a donkey has been widely discussed on the internet.

“Don't you think this doesn’t correspond with your image which you are trying to create and that it steps over the line of respect to our people? … How could you release such a video?” Narochnitskaya asked.

The LDPR leader said that "our people have been mocked for one hundred years" and now there is nothing to be proud of and yet we should bring up the sense of pride for our country among the people.

“I’d like to explain that many of our citizens are suffering about the past greatness of Russia, i.e. the Russian Empire, the Soviet Union. Today, there is no greatness. And with this clip in 30 seconds I wanted to show that today it is not the famous troika that [once] galloped,” Zhirinovsky said, referring to a winter sleigh drawn by three horses.

“Today it is a donkey. That is the thing. Today they smacked down our country, economy, culture, and the Russian language,” he said, adding: "We don’t want this weak animal to be the symbol of Russia.”

Putin will not take part in debates personally because he would have to take a leave of absence, his spokesman Dmitry Peskov explained.