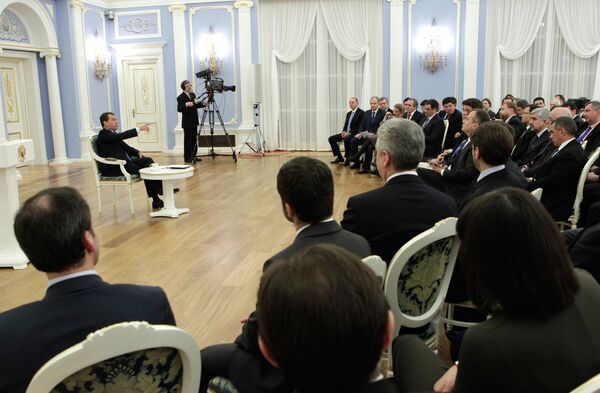 Medvedev, who is not running for reelection in March, proposed a host of political reforms in January, including the return of direct elections for regional governors. Currently governors are nominated by the president from a list of candidates proposed by the party that won regional elections. A nominee must then be approved by the regional parliament.

“Many people have started perceiving governors as a direct projection of the Kremlin: if the president submits the candidacy, he is responsible for the governor, which is partly fair of course,” Medvedev said at a meeting with representatives of a public committee of his supporters.

“But on the other hand, the governor should be accountable to people living in a given area, and this connection started falling apart at some point,” the president said.

The bill on direct elections was drafted within a month following street protests against alleged fraud in the December 4 parliamentary elections and increasing popular discontent with the political status quo.

Then-President Vladimir Putin introduced the current system in 2004 in a bid to strengthen national security in the wake of the Beslan school siege.

Medvedev also said he had met with different people who told him they want direct election of governors.

“If that is what they want, we will give them such an opportunity,” he said.

Under the new draft law, registered political parties will nominate candidates for regional governors for five-year terms after voluntary consultations with the president, and their candidates will not have to collect signatures.

Candidates who are not nominated by a party will have to collect a certain number of signatures, as specified by local parliaments.