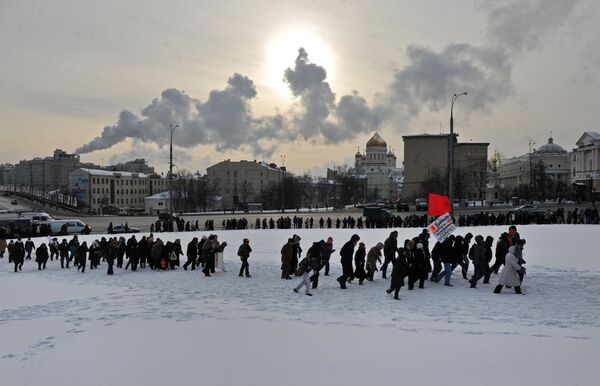 © RIA Novosti . Artem Zhitinev
/
Go to the mediabank
Subscribe
International
India
Africa
The anti-Putin protesters who packed icy downtown Moscow on Saturday confounded critics who said the movement was running out of steam, but even the most optimistic of demonstrators admit their arch-nemesis is likely to secure a return ticket to the Kremlin at March 4 presidential elections. So where does Russia’s ‘Snow Revolution’ go from here?

The anti-Putin protesters who packed icy downtown Moscow on Saturday confounded critics who said the movement was running out of steam, but even the most optimistic of demonstrators admit their arch-nemesis is likely to secure a return ticket to the Kremlin at March 4 presidential elections. So where does Russia’s ‘Snow Revolution’ go from here?

“The demonstrations have already achieved a lot,” protest organizer and enviromental activist Yevgenia Chirikova told RIA Novosti on Monday. “Society has changed – it’s the authorities who have not altered.”

She also hailed the peaceful character of the protests and predicted that “a million demonstrators” could take to the streets after the March polls.

“We are seeing the most intelligent and cultured protests anywhere in the world,” she said. “Putin is doomed.”

Protesters first took to the streets after December’s parliamentary polls, which were marred by widespread allegations of electoral fraud in favor of Putin’s United Russia party.

And on Saturday, demonstrators passed a resolution calling for fair elections and the release of “political prisoners”, as well as new parliamentary polls within a year and new presidential elections by 2014. They also urged “not one vote for Putin” at the upcoming presidential vote and called for volunteers to help monitor the polls.

But Do The Protests Lack Bite?

“If the aim was simply to prove that 100,000 people can gather in Moscow in minus twenty degrees [Centigrade], then this was achieved,” wrote Kommersant FM columnist Stanislav Kucher on Monday. “But no one answered the question, ‘what now?’”

“There was no ultimatum issued to the authorities,” Kucher added.

The protesters have also faced criticism from the Other Russia movement, led by radical firebrand politician Eduard Limonov.

Limonov has poured scorn on the protest leaders over their willingness to coordinate rallies with the authorities. And on Saturday, his followers mingled with the crowd, calling for more aggressive steps.

“Our demands have still not been met, but people at these mass rallies are not prepared to participate more actively,” said activist Konstantin Bortsov. “But it’s clear that tougher measures are needed.”

Chirikova cited in response the example of Mahatma Gandhi, whose peaceful protests led to the end of British rule in India.

“Do you read the Bible?” she asked. “Do not answer evil with evil. Turn the other cheek.”

But Left Front leader and protest organizer Sergei Udaltsov accepted that the current protests were having little effect on the Kremlin, whose proposals for political liberalization have been slammed as “imitation reforms” by the opposition.

“The authorities are deliberately not reacting – quite the opposite, they are holding counter rallies to show they will not compromise at all,” he told RIA.

Pro-Putin supporters rallied an “anti-Orange” demonstration in Moscow on Saturday. Police said 140,000 people were there, but independent media cast doubt on the figure. There were also reports of government employees being forced to attend, which Putin admitted could be true.

“So what next?” said Udaltsov, who drew perhaps Saturday’s biggest cheer when he ripped up a portrait of Putin on stage. “If the results of the elections are falsified again, we will simply refuse to recognize them and hold rallies – every week, every day if necessary.”

“We will organize labor strikes with unions,” he went on. “We will call on people to put up tents and not to leave the streets until the elections are annulled or until the authorities quit the political scene altogether.”

“But right now we are giving the authorities the opportunity for peaceful dialogue,” he added.

Putin was Russia’s president between 2000 and 2008, but was barred by the Constitution from standing for a third time. He became prime minister after the election of his handpicked successor, Dmitry Medvedev, but remains by far the most powerful political figure in the country.

State-run pollster VTsIOM said last week that Putin enjoyed the support of 52 percent of voters, just enough to give him victory in the first round of voting. His nearest rivals, Communist Party head Gennady Zyuganov and nationalist Vladimir Zhirinovsky were tied on eight percent.

A poll by the independent Levada Center indicated last week that a mere 49 percent of Russians believed the presidential polls would be fair. Russia’s unpopular election chief, Vladimir Churov, is a staunch Kremlin supporter who once said “My first rule is Putin is always right.”

Search For A Common Strategy

The protest movement has united a bewildering number of political movements, from liberals to nationalists, from monarchists to anarchists, and while its diversity has been one of its strengths, it is also its Achilles heel.

Putin was quick to seize on the lack of a common position – or even a central, identifiable leader – among the protesters after the first two mass rallies in December.

“Who should we talk with?” he pondered aloud, when asked if the authorities would hold negotiations with the demonstrators. “They should come together with some form of joint platform and joint positions so we can understand what these people want. They are very different.”

And on Monday, novelist Boris Akunin, a member of the newly created League of Voters movement, suggested doing just that. Writing in his blog, he proposed holding a meeting to hammer out a united strategy at opposition “primaries” before the presidential polls.

“If we can’t even agree among ourselves, then we will fail any exam on the maturity of our civic society,” he wrote in his blog.

Of course, Russia’s protest leaders have never pretended that things would be easy.

“One peaceful march will not change our country,” protest organizer Boris Nemtsov said on the eve of Saturday’s rally. “We are in for a long, hard struggle.”