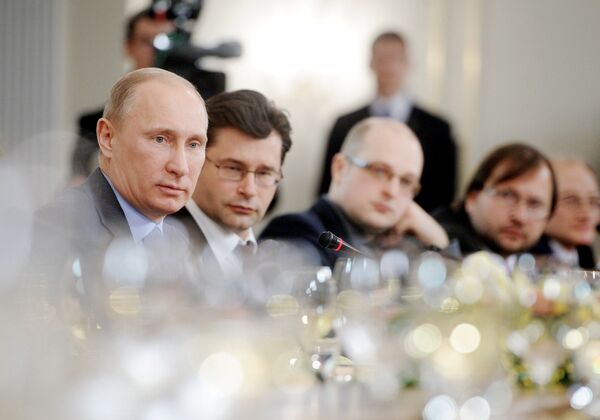 © RIA Novosti . Alexei Druzhinin
/
Go to the mediabank
Subscribe
International
India
Africa
The future Russian government could include “professionals with different political views” but would not operate as a classical coalition, Prime Minister Vladimir Putin said on Monday at a meeting with political analysts.

The future Russian government could include “professionals with different political views” but would not operate as a classical coalition, Prime Minister Vladimir Putin said on Monday at a meeting with political analysts.

“We don’t rule out taking on people in government with different political views, it’s only important that they are professionals. But it would not be a coalition government in the classical sense of that term,” Putin said.

In October 2011, President Medvedev presented a new political blueprint for a two-chamber model government which he is expected to head in the event of Putin winning the presidential election. A wider “big government” could exist alongside the traditional “narrow” cabinet government, including representatives of civil society. Business representatives, civil servants and bureaucrats, cultural figures and journalists were proposed as possible members of permanent advisory bodies.

Putin dismissed the utility of coalition government among the various parties as ineffective.

“I don’t think it would be very effective,” he said. “When people with different views get together, it frequently ends up that their decisions on the level of executive government are compromised in character and far from effective,” he added.

Putin said he hoped that the new government would include people who had done well in administrative bodies in the regions as well as in business.

Putin said he doubted about whether it is the right time for Russia to switch to an elected judiciary.

"Today, we have an integral procedure and we should modify it. But what is the point of switching to an elected judiciary right away? I think the quality of our judicial manpower will be tainted. We face problems in all areas and the judiciary is no exception. However, if we switch to a different procedure, we will add political aspects to this issue. Why should we do this?"