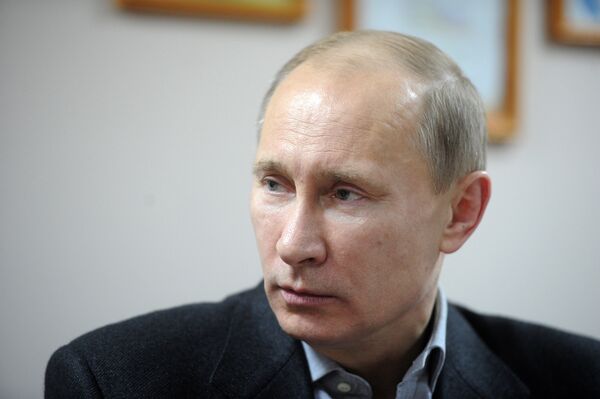 © RIA Novosti . Alexei Druzhinin
/
Go to the photo bank
Subscribe
Russian Prime Minister and presidential frontrunner Vladimir Putin called for anti-corruption and pro-democracy measures in his new article, “Democracy and the Quality of State,” published on Monday in the Kommersant business daily.

Russian Prime Minister and presidential frontrunner Vladimir Putin called for anti-corruption and pro-democracy measures in his new article, “Democracy and the Quality of State,” published on Monday in the Kommersant business daily.

Putin said the fight against corruption should become a “national cause,” but warned against calls to defeat corruption by mass repression.

"To defeat systemic corruption, a line should be drawn to separate not only authority and property, but also executive power and control over it. Both the authorities and the opposition should bear political responsibility for the fight against corruption,” Putin said.

As a specific measure, Putin has proposed introducing administrative courts to hear individuals’ complaints against officials, as well as online broadcasts and publicly available transcripts of court hearings. He also proposed creating a database of all verdicts issued in the court of law, a system similar to the one already existing in arbitration courts.

He also said Russia should change its procedure for appointing the chairman and auditors of the Russian Audit Chamber as a measure to boost transparency.

“Candidates should be proposed not by the president, as it is at present, but by the State Duma Council with the consent of all factions,” Putin said.

The prime minister also proposed creating a list of “corruption-prone” posts in the executive branch and the management of state corporations.

“Those officials should receive huge salaries but agree to absolute transparency, including their family spending,” Putin said.

Putin proposed vesting citizens and netizens with a greater role in politics, including a chance to influence the lawmaking agenda.

“We should… give citizens an opportunity to form the lawmaking agenda on their own, to put forward their projects and articulate priorities. I propose setting up the rule of obligatory consideration of public initiatives which will gather 100,000 and more signatures on the internet,” Putin said.

He added that those willing to take part in the project will have to waive their online anonymity, and the state should develop “official registration procedure for those willing to become a part of this system.”

Putin is considered the most likely candidate to win the presidential election on March 4.

Putin served two terms as Russia’s president between 2000 and 2008, but was barred from standing for a third consecutive term by the Constitution. He became prime minister after his handpicked successor, Dmitry Medvedev, became president.