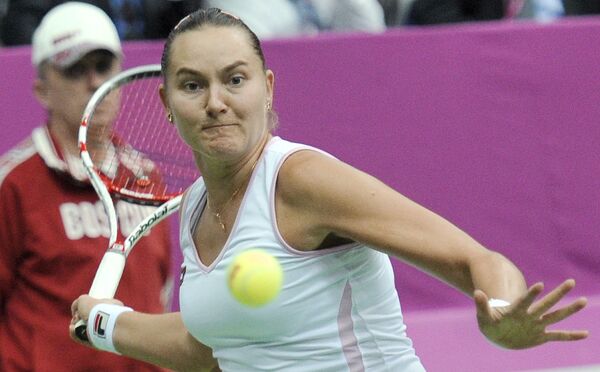 Carla Suarez Navarro hauled Spain back into contention in their Fed Cup quarterfinal in Moscow Sunday, beating a poor Nadia Petrova to reduce Russia’s lead to 2-1.

Carla Suarez Navarro hauled Spain back into contention in their Fed Cup quarterfinal in Moscow Sunday, beating a poor Nadia Petrova to reduce Russia’s lead to 2-1.

Petrova was a late replacement for Maria Sharapova and appeared poorly prepared for the match, which Suarez Navarro won 6-0, 6-3.

"I really wanted to win. I was very relaxed and I think this was one of my best matches for the Spain team," Suarez Navarro said. "In the first set, I played very well, very aggressively."

Suarez Navarro’s win marked the first time that Spain had won a rubber against Russia, after losing their two previous matches 5-0 and 4-0.

"I made a lot of mistakes, therefore I lost," Petrova said, rejecting suggestions she had not trained adequetely in the run-up. "I prepared yesterday, so I was ready."

Petrova, the world No. 33, had the power advantage but was outmaneuvered by the nimble, 55th-ranked Suarez Navarro.

The Russian quickly grew frustrated with her performance, getting into a heated exchange with the umpire after losing the first set on a net violation.

Kuznetsova next plays Soler-Espinola in the fourth match.

The final rubber will be a doubles match between Russia’s Ekaterina Makarova and Nadia Petrova and the Spanish pair of Arantxa Parra-Santonja and Nuria Llagostera Vives.

Russia had not previously lost a rubber against Spain in two Fed Cup ties, including the 2008 final, which Russia won 4-0 in Madrid. Kuznetsova, Makarova, Llagostera Vives and Suarez Navarro all played in that match.