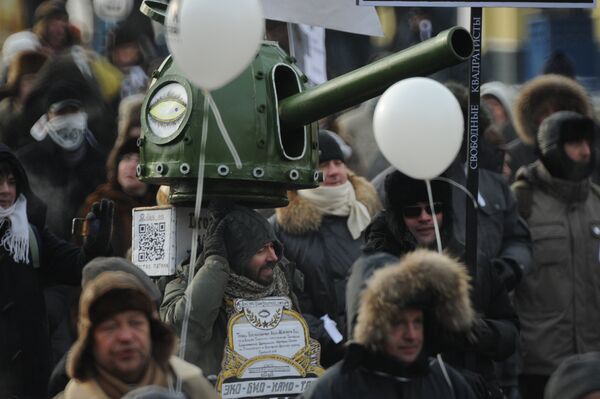 Public observers praised police activity at Saturday’s protest rallies in Moscow but said the rallies could have been organized in a better way.

Public observers praised police activity at Saturday’s protest rallies in Moscow but said the rallies could have been organized in a better way.

Tens of thousands of protesters marched and rallied across Russia on Saturday, with their key demands being Prime Minister Vladimir Putin’s resignation and fair elections. Even more, according to police, rallied in support of Putin at a different venue in the Russian capital.

Regular protests across Russia started after the December 4 parliamentary vote that critics claimed was slanted in favor of the ruling United Russia party, which the authorities denied. The protests against unfair elections have been the biggest show of dissent here for almost two decades.

Saturday’s protest came a month before the March 4 presidential polls in which Putin, 59, is to seek a third stint in the Kremlin. He was barred by the Constitution from standing for a third consecutive term in 2008 and handed over power to his hand-picked successor Dmitry Medvedev.

He slammed the organizers of one rally for wrong calculations. The organizers of the rally on Sakharov Avenue said 30,000 people will attend it, but only 150 came, according to police.

Fedotov said it is unjust that laws do not envision fines in such cases, but stipulate that if more people came to attend a rally than expected then the organizers should be fined.

The organizers of another rally on Saturday, in support of Vladimir Putin, will be fined because the actual number of its participants, according to police, exceeded 100,000 with prior permission received only for 15,000.

“I have received no reports of any large-scale violation,” Lukin told RIA Novosti.

He called the behavior of protesters “cultured.”

During protests against alleged fraud at the December 4 State Duma elections in Russia, which took place in the first two days after the vote, police were accused of a brutal crackdown on rally participants. Around a thousand people were detained and some jailed for up to 15 days.