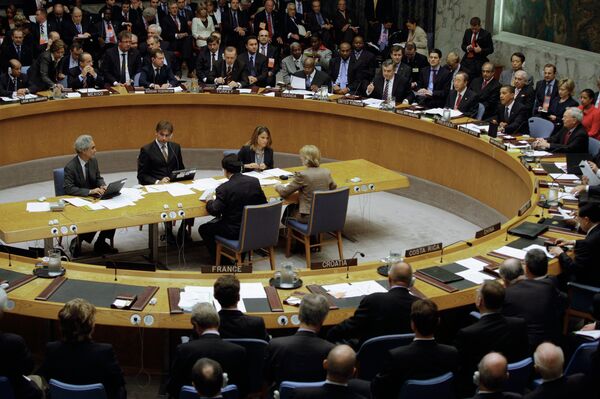 Russia and China vetoed a UN Security Council resolution on Syria that calls on President Bashar al-Assad to step down.

Russia and China vetoed a UN Security Council resolution on Syria that calls on President Bashar al-Assad to step down.

Thirteen of the council’s 15 members voted in favor of the resolution aimed to stop the violence in Syria.

“The draft resolution that was put to a vote did not reflect Syria’s realities well enough and sent conflicting signals to the political forces in Syria,” Russian Ambassador Vitaly Churkin said after the vote.

Russian Foreign Minister Sergei Lavrov previously said the resolution did not set enough demands on anti-government armed groups, and that Russia was concerned it could jeopardize the national dialogue among political forces in Syria.

Lavrov said earlier on Saturday he and Foreign Intelligence Service head Mikhail Fradkov will visit Syria and meet with President al-Assad on February 7.

The visit will be made on instructions from Russian President Dmitry Medvedev.

Lavrov did not reveal any details of the upcoming the visit.

This is the second time that Russia and China as permanent members have vetoed the Syria issue. In October, they blocked a European-sponsored resolution condemning Syria and threatening possible sanctions.

Russia, one of President al-Assad’s firm supporters during the uprising against his regime, indicated earlier this week that it would veto the draft resolution calling on Assad to step down. Moscow has proposed its own draft, which the West criticized as being too soft.