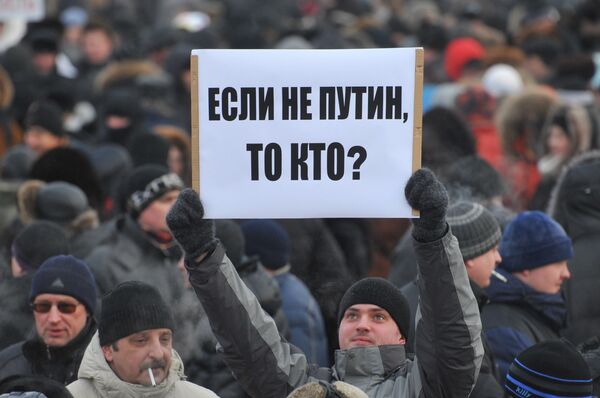 Over a hundred thousand people braved the bitter cold at two major rallies in downtown Moscow on Saturday as a power play between champions of political liberalization and supporters of Prime Minister Vladimir Putin continues to unfold.

Over a hundred thousand people braved the bitter cold at two major rallies in downtown Moscow on Saturday as a power play between champions of political liberalization and supporters of Prime Minister Vladimir Putin continues to unfold.

The first demonstration demanded fair elections at the March 4 presidential polls, at which Putin is expected to secure a third term in the Kremlin. It also calls on Russians “not to give a single vote” to Putin.

The opposition rally is widely seen by analysts as a litmus test of protesters’ ability to maintain momentum after two earlier protests against alleged vote fraud in favor of Putin’s United Russia party at December’s parliamentary polls.

“We are prepared for a long tough struggle,” protest organizer and opposition figure Boris Nemtsov said on the eve of the rally. “One peaceful march will not change the country.”

The protests included a march through downtown Moscow and a rally across the Moskva River from the Kremlin, when temperature in Moscow stood at minus 22 degrees Celsius. The two previous rallies in December drew an estimated combined total of 100,000 people.

A variety of political groups gathered for the rally: participants carried flags of the liberal Yabloko Party, of the unregistered liberal Party of People's Freedom, red Communist flags, as well as anarchist and Russian nationalist banners. Many held white balloons and ribbons of the Voters League.

Protesters carried posters and banners with demands ranging from rather general "Russia will be free!" and "We do care!" to blatantly anti-Putin "Not a single vote for Putin!" and "Putin, go away!

Many protesters chanted "Russia without Putin!"

Among the crowd are presidential candidate Mikhail Prokhorov and former finance minister and Putin’s longtime friend Alexei Kudrin. Both said earlier they do not plan to speak at the rally.

Boris Akunin, a founding father of the Voters League, told RIA Novosti while marching that people came to demand fair elections, division of powers and the democratization of political life in Russia.

"It is important that so many people came here," he stressed. Leaders of the opposition were worried that a poor showing at the rally and the march would mean that the momentum of the protests had been exhausted, putting an end to hopes of pressing the government to pursue reforms.

The rally passed a resolution calling attendants not to vote for Putin in March, as well as calling for the release of “political prisoners.” It also called for the sacking of election head Vladimir Churov, who is accused of covering-up large-scale fraud during the parliamentary vote, and the liberalization of political legislation.

Speakers at the rally were a mixed bunch, ranging from nationalist leader Alexander Belov to writers Lyudmila Ulitskaya and Boris Akunin. Former TV host Leonid Parfyonov and failed presidential candidate Grigory Yavlinsky, who was denied a place on the ballots by the authorities, also gave speeches.

Staunch leftist leader Sergei Udaltsov denied allegations that the rally was staged by the U.S. State Department in his speech, a key point for speakers at a pro-Putin rally held elsewhere in the city on the same day.

The rally was concluded with a song from Russian rock star Yury Shevchuk, whose acoustic performance was accompanied by a host of white balloons which were let loose by participants of the rally, who chanted along with the singer.

In a seperate rally accross town, Putin's supporters chanted "There are more of us!" Hundreds of tri-color Russian flags fluttered above the huge crowd and many participants carried posters, saying "Muscovites for Putin!", "No to Orangists!" and "Russia forever!"

President Dmitry Medvedev, widely seen as Putin’s junior partner in Russia’s ruling tandem, proposed a host of political reforms after the initial vote protests, including the return of direct elections for regional governors and easier registration for political parties and presidential candidates. His proposals were dismissed by protest leaders on Friday as "imitation reforms."

Putin has also ordered the installation of video cameras at polling stations and has encouraged independent monitors to oversee the presidential vote.

The organization of Saturday’s march has seen the involvement of the Voters League, a freshly-minted public group that claims no involvement in politics and is led by popular figures such as novelist Akunin, TV journalist Leonid Parfyonov and rock musician Yury Shevchuk.

A separate rally drew some 140,000 people, according to police, and speakers urged protesters to resist what organizers say are attempts to instigate an Orange Revolution in Russia. So-called Color uprisings took place in the former Soviet republics of Ukraine and Georgia in the early 2000s after contested presidential elections.

Putin thanked late on Friday those people who planned to attend the rally in his support.

There have been numerous reports in the Russian media of state employees being coerced to attend the Anti-Orange rally, but the authorities have said these are untrue or the actions of over-zealous, low-level officials.

Speakers at the pro-government rally lambasted the opposition for plotting a revolution in the interests of Western powers.

“We say no to the destruction of Russia. We say no to Orange arrogance. We say no to the American government…let’s take out the Orange trash,” political analyst Sergei Kurginyan said at the rally by Moscow’s Poklonnaya Gora memorial, which he co-organized.

Kurginyan and the others said their opponents intend to overthrow Putin through public protests, like during Ukraine’s “Orange revolution” in 2004. They also insist protesters at Bolotnaya Ploshchad are acting in the interest of the United States, whose ambassador to Moscow, Michael McFaul, met with rally organizers in January.

Participants of the two rallies “have nothing to discuss with each other,” political analyst Nikolai Starikov said at the rally.

Writer Eduard Bagirov, a member of Putin’s campaign staff, denounced participants of the rival rally as “good-for-nothing slackers” and told the attendants that Putin passed his greetings.

Putin and other senior officials also warned about a foreign influence in Russian protests and cautioned against a possible revolution, though also conceded the protests were peaceful and mostly driven by grassroots activism.

The rally lasted slightly over an hour and wrapped up shortly after 2 p.m. without incidents. Police said the organizers would be fined for exceeding the officially sanctioned attendance limit of 15,000.

Both demonstrations have been authorized by City Hall. Moscow police say they deployed 9,000 officers to maintain order at the rallies.

Rallies by both the opposition and Putin's supporters took place in cities across Siberia and the Far East, most of them gathering several hundreds of protesters. An opposition rally in Novosibirsk was attended by an 1,500 to 2,000 people, according to police estimates, while a pro-Putin indoors rally in far eastern Birobidzhan had 600 participants, organizers said.