The Russian Navy Grows from Bottom up 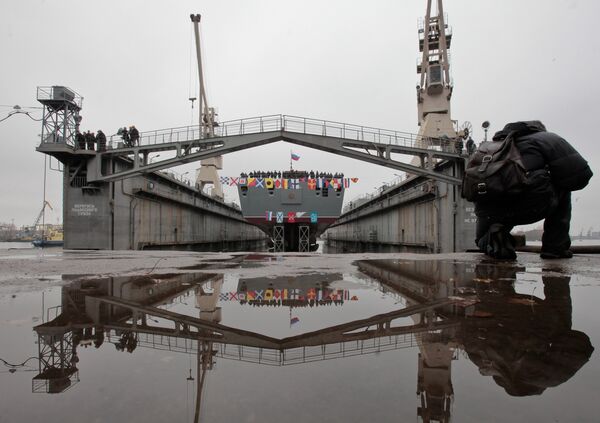 While the nation’s leaders work at overhauling the Navy organization, the Navy itself continues to order new ships.

While the nation’s leaders work at overhauling the Navy organization, the Navy itself continues to order new ships. Last year’s persistent scandals over nuclear submarine contracts proved a hard nut to crack when assigning government contracts in 2011. For a time, the submarine scandals confused the process for ordering surface ships. Meanwhile the focus there is being shifted to the production of time tested projects built around today’s armaments.

“Due to the lack of funding, the Navy has come close to a numerical minimum required to fulfill its mission,” Deputy Prime Minister Dmitry Rogozin said at a meeting with the heads of the Sevmash and Zvezdochka shipyards, and the Navy command. The meeting was called to discuss the development of Russia’s Navy.

The deputy prime minister said many ships are being used beyond their service life and the Russian Navy needs urgent renovation. “The now widespread practice of rebuilding and renovating the fleet ship by ship to extend its service life has destroyed our production cooperation,” Rogozin said.

Still, it’s inaccurate to say that only one-off vessels are being constructed. Last Wednesday, two ships were laid down in St. Petersburg: the Project 22350 Admiral Golovko frigate and the Project 20385 Gremyashchy corvette.

The Golovko is the third vessel in the Project 22350 class. The first one – Admiral of the Fleet of the Soviet Union Gorshkov – hit the water in October 2010 and the second (Admiral of the Fleet Kasatonov) is scheduled to be launched this year. The Gremyashchy is formally the first Project 20385 ship, but it is a further development of Projects 20380 and 20381 corvettes, two of which have already joined the Baltic Fleet, with one more undergoing trials and another under construction. Current contracts provide for the building of eight Project 22350 frigates (including the Gorshkov and the Kasatonov) and eight Project 20385 corvettes (the Gremyashchy will be the first).

What are we building?

The Russian Navy is not obsessed with grand-scale projects or the “de facto global standard” – strike groups of heavy ocean-going ships deployed around nuclear aircraft carriers. Even at its height the Soviet Union failed to live up to that standard with reasons ranging from weaknesses in industry and ship repair facilities to the varying rants of top military and defense industry leadership.

The Russian Navy orders simple and ordinary workhorses for the sea. When a large number of ships was decommissioned in the 1990s (the non-strategic portion), it left a big gap in the country’s naval forces.

The commissioning of single surface vessels for each main class (like the Pyotr Veliky in 1996) did little to prevent the overall degradation of Russia’s four fleets.

Project 22350 frigates (multi-role offshore patrol vessels) are believed to be the core of Russia’s new Navy now. In the early 2000s, when this project was accepted as promising, the number of vessels to be built was 30. It is difficult to appraise such Napoleonic plans, but the approach has not changed: the volume of construction anticipated is up to 20 units over the next 15 to 20 years.

Next in line is the development and construction of ocean-going destroyers. A competition is currently under way for the best project. These ships need to be large enough and well-armed. They will be in fact missile cruisers rather than destroyers. The Navy is growing “from the bottom up” as it tries out new directions and unifies the armaments on its new vessels.

Roman Trotsenko, the head of United Shipbuilding Corporation, who touts the new shipyards at Kotlin Island, regularly promotes the idea of a nuclear aircraft carrier. The military is cautious: it says the State Armaments Program till 2020 does not mention an aircraft carrier. Yet it has launched a series of research and development projects just in case to determine the role and place of such ships in the Navy of the future.

The tendency of the Russian military to save costs and unify the fleet’s missiles is worth a separate comment. In the Soviet days, the Navy went on a spree of producing “unique” strike missile systems with incompatible launchers and missiles. In each case the adoption of one or another system was absolutely justified by tasks at hand. But it all produced a monstrous zoo full of combat weapons in the Navy. The defense industry, accustomed to spending freely, also lent a hand: sometimes military experts, who were practically-minded, combined a new missile with an old launcher. The result was self-evident.

Take, for example, the saga of Project 670 and 670M submarines, which were to be equipped with one missile system (there were plans to arm older submarines with the new Malakhit missile with an extended range). The upshot, however, was that each project retained its original armaments – until the boats were decommissioned in the early 1990s.

But times change and the money, not a lot even in the glorious era of Fleet Admiral Sergei Gorshkov, came to an end. The concept of a multi-purpose ship firing system became overriding: all ships in the basic classes – including Projects 20385 and 22350 and their likely cousins (ocean-going destroyers) – are now to be equipped this way.

In effect, it is a group of unified vertical launchers which offer a wide range of configurations. A ship equipped with this multi-purpose system can carry anti-ship Oniks cruise missiles or missiles from the all-purpose Kalibr system (in three configurations: supersonic anti-ship, subsonic for engaging ground targets and anti-submarine). Future plans contemplate extending this armory by including surface-to-air missiles, although for the time being the new system is employed only in strike systems.

The West will help us

The delay in commissioning Project 22350 vessels (the first ship was laid down in 2006) suggested a simple solution. It was decided that the amount of time needed to start the construction Gorshkov class ships could also be spent on a simultaneous commissioning of Project 1135.7 frigates.

This frigate is a very interesting ship. It is based on Project 1135.6 – a distant descendant of Soviet Project 1135 patrol ships developed for the Indian Navy (known as Talwar-type frigates). The Baltic shipyard has already delivered the first three vessels of this class to India. Three more are under construction at the Yantar shipyard in Kaliningrad.

The Russian Navy, which badly needs new ships, has requested a “domestic” version of the Talwar, code-named 1135.7 instead. The projects turned out to be so similar that many systems adopted for the 1135.7 turned out to be systems developed for overseas customers and until recently they lacked the authorization for use in the Russian Armed Forces.

The Russian Navy has now placed orders for six Project 1135.7 frigates with Yantar. Two of them are already laid down: the Admiral Grigorovich in December 2010 and the Admiral Essen in July 2011. For 2012, plans call for the start of two or three more ships, and one or two in 2013.

But the feeling is that six frigates are not the limit: Project 22350 is costly and needs to be brought up to date. The current brass, badly shaken by the 1990s disaster, is holding to the maxim: “If it works, don’t fix it.” So if the 1135.7 is accepted by the Navy, a large series will be built – perhaps in an upgraded configuration.

This will be the Russian surface fleet for the 21st century: tight-fisted, pragmatic and knowing its limits. Public opinion seems abashed to see its military in this light – but it will have to get used to it.