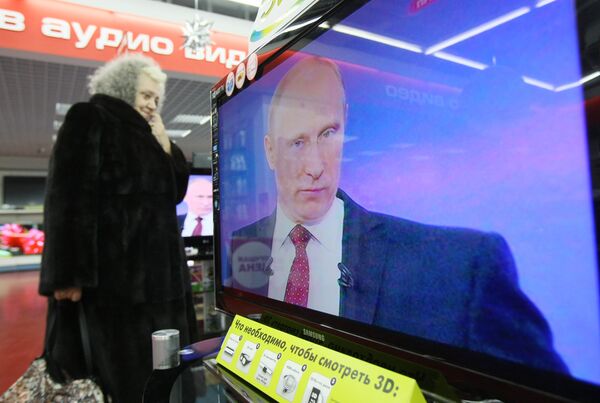 © RIA Novosti . Alexandr Kryazhev
/
Go to the photo bank
Subscribe
The creation of an independent major television channel proposed by President Dmitry Medvedev last month as part of wide-reaching political reforms would be a landmark achievement for Russia, a Kremlin advisor said on Thursday.

The creation of an independent major television channel proposed by President Dmitry Medvedev last month as part of wide-reaching political reforms would be a landmark achievement for Russia, a Kremlin advisor said on Thursday.

“I’ve been waiting for this for a very long time,” said Mikhail Fedotov, head of the presidential council on human rights and the development of civic society.

“We are not just talking about television here, but about civic society, about an instrument for its formation and development,” he told a roundtable in downtown Moscow.

Fedotov’s council was tasked with developing a plan for the channel, as was the presidential administration.

Medvedev called for the creation of the new channel on December 22, two days before a mass protest against alleged electoral fraud in favor of Prime Minister Vladimir Putin’s United Russia party.

Russia’s major television channels are all state-controlled and frequently accused of pro-government bias. Criticism reached a peak after initial, spontaneous protests against suspected vote fraud at the December 4 parliamentary elections were largely ignored by national television.

State-run channels, however, did provide extensive coverage of subsequent approved demonstrations, albeit in a highly sanitized form.

Medvedev believes the proposed new channel should not feature advertisements and not rely on federal funding, as well as be free-to-view, Fedotov said.

“In light of this, we will have to find some exotic forms of funding,” he added.

Fedotov also said that the make-up of the management of the channel had yet to be discussed, but denied that its eventual financers would have an influence over content.

But Russia, as many analysts have pointed out, already has a “public” television channel in the form of Dozhd TV, a popular independent station that began broadcasting in 2010. The channel, which has not hidden its support for the vote fraud protests, is available online and via satellite. Medvedev was earlier reported to have been a fan, although media said he had “unfollowed” the channel’s Twitter feed after vote protests began.

“We all pay taxes, which are partly used to finance state television, so society already has its own channels,” Dozhd TV founder Natalya Sindeeva said at Thursday’s roundtable. “Why can’t we just do away with censorship right now?”

Analysts have also been sceptical about the possibility of a genuinely independent television station in the present political climate.

“Under the current authorities, the creation of such a channel is unrealistic,” Alexander Morozov, head of the Center for Media Studies, a Moscow think tank, told RIA Novosti. “We need a total overhaul of the public sphere.”

“On the other hand, if a forceful figure such as [award-winning journalist and vote protest organizer] Leonid Parfyonov takes on the task of trying to create a new generation of television channel, this could at least be a step in the right direction,” he added.