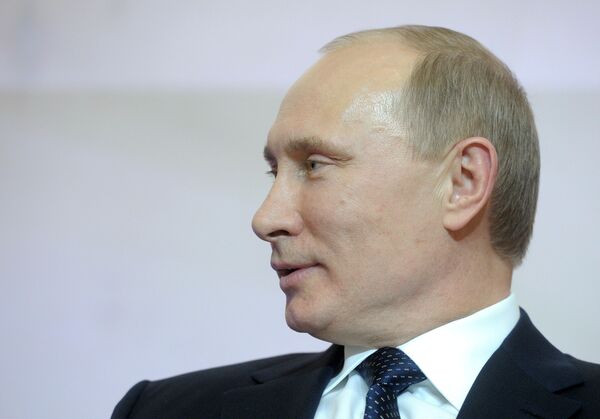 © RIA Novosti . Alexei Druzhinin
Subscribe
Prime Minister and presidential candidate Vladimir Putin said a second round runoff vote for the Kremlin threatens to destabilize the country but there is “nothing wrong with it.”

Prime Minister and presidential candidate Vladimir Putin said a second round runoff vote for the Kremlin threatens to destabilize the country but there is “nothing wrong with it.”

Three political pundits contacted by RIA Novosti offered vastly different opinions on Putin’s message, disagreeing on its recipients and on whether or not he actually endorsed a runoff he was reportedly trying to avoid.

“A runoff would inevitably lead to the continuation of the power struggle and some destabilization of the political situation,” Putin said on Wednesday.

“However, there’s nothing wrong with it and I’m ready to work through the runoff if need be,” he said at a meeting with potential observers for the March 4 presidential vote in Moscow.

Putin is favored to win the presidential race, which could see him return to the Kremlin after two presidencies between 2000 and 2008. However, he has to deal with slowly falling support ratings and a wave of protests by opposition groups. Putin's rating stood at 49 percent last week, according to state-run VTsIOM pollster, still very low compared to last year.

Media reported earlier that Putin’s campaign staff are trying to avoid a runoff, like in his two previous campaigns. Critics say Putin's team will possibly use administrative resources and vote rigging to strengthen his initial victory. He must win more than 50 percent of the vote in order to avoid a runoff

At the Wednesday meeting, Putin admitted that administrative resource were used in various regions, however, he put it down to local traditions.

He cited the North Caucasus as an example, where 90 to 99 percent, almost twice the national average, voted for the ruling United Russia party in December’s parliamentary elections. Putin said the unusual vote was due to local voters obeying their religious leaders, who support the ruling party.

Putin wants to avoid a runoff, which, some believe, would weaken his position, said Sergei Mikheyev of the Center of Political Technologies. He added that Putin's speech was a signal to groups within the ruling elite who are expecting a two-round vote.

He said these groups are comprised of supporters of outgoing president Dmitry Medvdedev and remnants of power groups from the 1990s but named no names. Putin’s speech was a rejection of these groups’ push for a runoff, Mikheyev said.

Head of St. Petersburg Politics Fund, Mikhail Vinogradov, agreed that Putin’s words were a message against a runoff but said they were addressed to authorities on the ground who are told to muster the administrative resource to ensure Putin’s swift victory.

“Putin is showing them the idea of a first-round victory stems from him personally,” Vinogradov said by telephone.

By contrast, Alexei Mukhin of the Center for Political Information said Putin was honest when he said there’s “nothing wrong with a runoff.”

Putin’s words were a “therapeutic” message to his own supporters to mentally prepare them for the first runoff of his career , Mukhin said. He denied that Putin was speaking to local authorities, saying the Prime Minister would not give such instructions through a public speech.