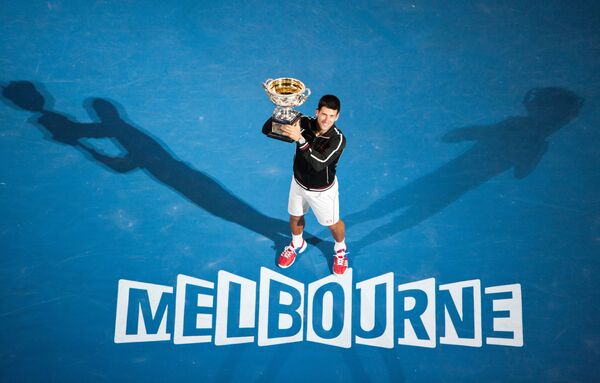 The monumental contest that went into the early hours in Melbourne affirmed the Serb’s position at the top of the men’s game, as he became only the fifth player in the Open era to win three straight grand slam finals, prevailing 5-7, 6-4, 6-2, 6-7 (5), 7-5.

"Unfortunately there couldn't be two winners tonight,” Djokovic said, clutching the trophy while glancing at Nadal. “But I wish you all the best for this season and I hope that we have many more matches like this, many more finals.”

Nadal, for his part, said: "I've really had a fantastic two weeks and I'll never forget this match"

It was the longest match in Australian Open history, outlasting Nadal’s five hour, 14 minute semifinal against Fernando Verdasco in 2009 by over half an hour.

The players slugged it out in a match that appeared to be heading for a more straightforward Djokovic win. He rebounded from the loss of the first set to take the next two with surprisingly little resistance before Nadal found his second wind and took it to a decider.

Djokovic earned a championship point when the net cord deflected a Nadal groundstroke wide, and the Serb took full advantage, passing into an open court with Nadal wrong-footed.

Djokovic sank to the floor, pumping his fists while prostrate before bouncing up, ripping his shirt off and doing a lap of honor.

The victory was made all the more remarkable because Nadal had had a day’s extra recovery time after Thursday’s defeat of archrival Roger Federer. Djokovic had a five-set semifinal bruiser against Andy Murray on Friday.