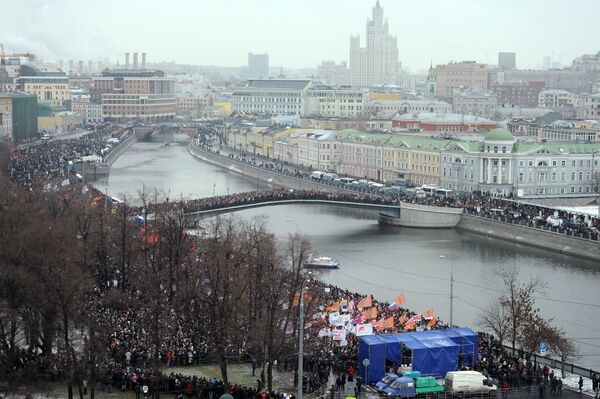 The city of Moscow has authorized three more rallies for February 4, the same day the opposition will hold a 50,000-strong rally against vote fraud in December parliamentary elections on Bolotnaya Square in downtown Moscow, Deputy Mayor Alexander Gorbenko said on Thursday.

The city of Moscow has authorized three more rallies for February 4, the same day the opposition will hold a 50,000-strong rally against vote fraud in December parliamentary elections on Bolotnaya Square in downtown Moscow, Deputy Mayor Alexander Gorbenko said on Thursday.

“Aside from the rally on Bolotnaya Square, a demonstration organized by a group headed by Konstantin Borovoi will be held on Sakharov Avenue, and a separate rally will be held at Poklonnaya Gora,” Gorbenko said.

One other permit was issued for a rally by Vladimir Zhirinovsky's far right Liberal-Democratic Party (LDPR) on Pushkinskaya Square.

None of the three is expected to significantly diminish attendance at the main event on Bolotnaya Square (approved attendance: 50,000 people). Borovoi said on his blog that the Sakharov Avenue rally (30,000 people) will be held at a different time of day so as not to conflict with the main rally on Bolotnaya.

The Poklonnaya Gora rally (15,000) will be in support of Prime Minister Vladimir Putin. Similarly, the LDPR rally (1,500) cannot be expected to draw many people away from the main rally.

Earlier in the day, the mayor’s office reached a compromise agreement with opposition movement representatives for a 50,000-strong protest rally at Bolotnaya Square in downtown Moscow on February 4.

“The city approved one of the variants proposed by the protest organizers,” Gorbenko said.

The permit authorizes a protest march that - as the organizers had requested - follows a route little more than one kilometer from the Kremlin, along Bolshaya Yakimanka Street to Bolotnaya, Ekho Moskvy radio reported.

Bolotnaya was also the venue for a December 10 demonstration against alleged fraud and ballot stuffing in December 4 State Duma elections.

The city authorities had originally hoped to schedule the main rally for February 5, but the organizers insisted on February 4, which they see as a symbolic date: exactly one month ahead of the presidential poll and two months after last year’s parliamentary election.

The protesters will demand the liberalization of Russia's political life, just as they did at last year’s rallies on Bolotnaya and Sakharov Avenue, each of which drew tens of thousands of people.