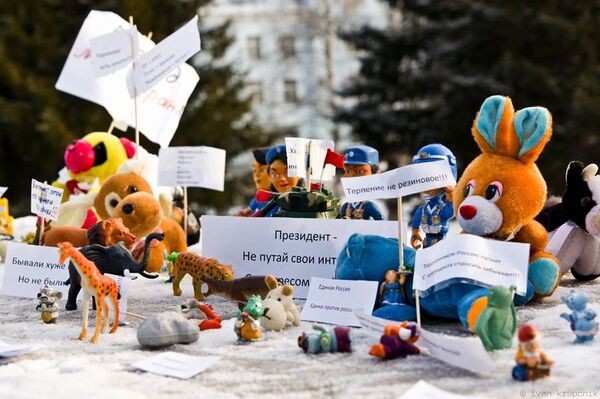 © Photo : Ivan Krupchik
Subscribe
Not amused by the creativity of liberal activists in the South Siberian city of Barnaul, police have moved to punish the organizers of toy demonstrations that took place in the city earlier this month in the wake of nationwide election protests.

Not amused by the creativity of liberal activists in the South Siberian city of Barnaul, police have moved to punish the organizers of toy demonstrations that took place in the city earlier this month in the wake of nationwide election protests.

After two unsanctioned demonstrations against alleged fraud in the December 2011 parliamentary polls were dispersed by Barnaul police, Kinder Surprise, Lego and other toys marched in to campaign for fair elections.

“While the authorities restrict our constitutional rights to freedom of peaceful assembly, the rights of toys have so far been untouched,” one of the protest organizers, 30-year-old IT specialist Andrei Teslenko, wrote in a post on Russia’s most popular social network Vkontakte.

But local police believe the law might have been violated as the demonstrations, called “nano meetings” by the initiators, have not been agreed with the authorities.

Noting that the organizers were also present at the events, deputy Barnaul police chief Andrei Mulintsev said he believed those demonstrations were “public events.”

“Somebody has brought the toys there and therefore expressed his opinion in such a way,” Mulintsev told RIA Novosti in a phone interview on Thursday. “People were approaching, looking [at the toys]… There is some kind of publicity in those events, right?”

However, unsure about their own interpretation of the law (“there is no such term as “nano meeting” in the federal legislation regulating public events”), police turned to prosecutors for advice, Mulintsev said.

“There is nothing to discuss,” prosecutor Sergei Kirei told RIA Novosti by phone. “I don’t understand why police decided to consult with us. I believe there are certainly grounds to initiate administrative cases.”

“People are not stupid,” he went on. “The figurines did not come there by themselves. They did not write the placards on their own. They have not invited anyone in social networks to join the public event.”

The toys, he said, were used as “agitation material,” adding that those complaining of legal nihilism during elections have themselves “gravely ignored the law.”

Activist Teslenko described as “absurd” the police move to “launch a trial against toys.” He said “no more than ten people” brought toys to the square in front of Barnaul’s Drama Theatre on January 7, and “no more than 15” joined the action a week later.

“This is again proof of willfulness of the local authorities,” he told RIA Novosti via VKontakte. “I wonder where our nano meetings would feature on the list of meetings that require official sanction.”

“I am certainly not going to plead guilty,” he added.

Kirei said he believed the gathering was a "picket."

“At least one person learned as a result of this that such an event had taken place, and I believe proving that [an unsanctioned public meeting has been held] will not be a problem,” he said.

The toy demonstration organizers face fines of up to $33 or arrest for a period of up to 15 days if found guilty of staging an unsanctioned public gathering and disobeying police orders.