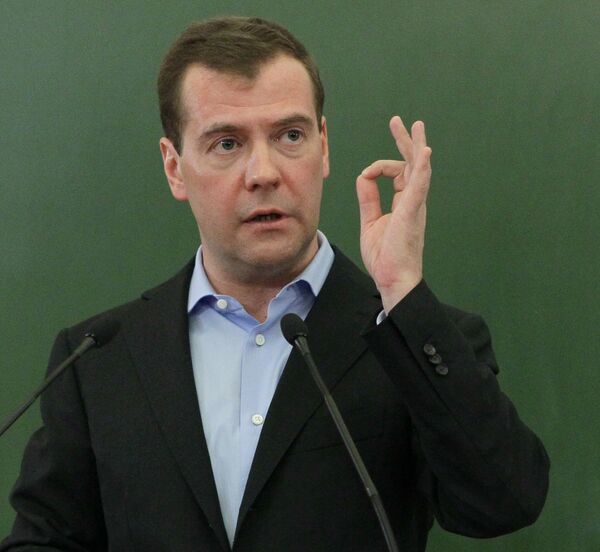 President Dmitry Medvedev promised on Wednesday to personally look into the case of Taisia Osipova, an opposition activist’s wife jailed on drug charges.

Osipova, a diabetic mother of a five-year-old girl, was jailed for 10 years in Smolensk in late December. Her supporters insist the case was fabricated by police as leverage against her husband, Sergei Fomchenkov, a senior member of an unregistered party, The Other Russia.

The case became a cause célèbre for anti-government protesters, who are planning a rally in Moscow on February 4.

“I’m ready to request the materials of the case and order prosecutors to analyze it all over again,” Medvedev said at a meeting with journalism students at Moscow State University.

“We have to look into whether she really was in possession of drugs” at her house, Medvedev said, adding that he could not rule out that police planted drugs on her.

He also said that the sentence was too harsh in any case, and urged Osipova to seek parole.

Regional prosecutors did not comment on Wednesday. Calls to the office of head Smolensk prosecutor Yury Verkhovtsev went unanswered.

He said this is not the first time Medvedev pledged to take a high-profile case under his control, but to no avail. In January 2011, the president personally pledged justice to Kommersant reporter Oleg Kashin, who was beaten by unidentified thugs outside his house in downtown Moscow in November 2010. No one has been charged in the case.

Osipova, 27, made headlines back in 2003 for smacking then-governor Viktor Maslov in the face with a bouquet of carnations in protest of his policies, which earned her a one-year suspended sentence. But she left active politics around 2008 and became a housewife.

In 2010, police found nine grams of heroin at Osipova’s house in Smolensk. But her supporters insist the search was conducted with multiple violations and the key witnesses for the prosecution are members of pro-Kremlin youth groups involved in crackdowns on the opposition, which undermines their credibility.

Prominent liberal journalist Yulia Latynina said on Ekho Moskvy radio last weekend that Osipova was a drug addict, which could lend weight to the prosecution’s allegations. But Osipova's husband, who has been living in Moscow since the late 2000s, also denied this on Ekho Moskvy, citing a medical check conducted during the investigation did not confirm that she was a drug user.