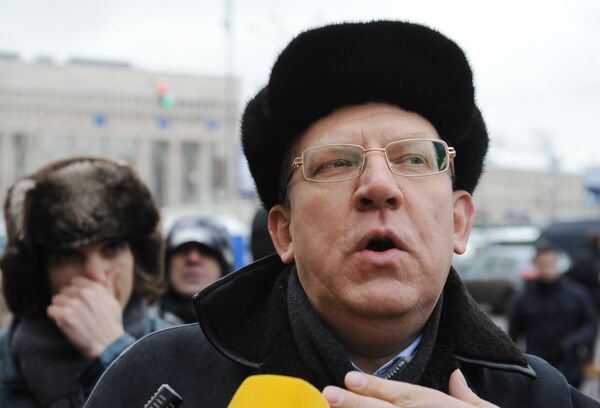 “I’m ready to cooperate with Yavlinsky to consolidate democratic forces,” Kudrin, who is considering formation of his own political party, wrote in his Twitter account.

Yesterday the Central Election Commission said 25.66 percent of the signatures Yavlinsky collected in support of his candidacy were invalid. The commission is expected to officially reject his registration at the end of the week.

The organizers of a planned opposition rally in Moscow on February 4 have said protesters would demand that Yavlinsky’s registration be approved. Kudrin, who has tried to position himself as a mediator between the protest movement and the government, has said failure to register Yavlinsky would undermine the credibility of the elections.

Earlier on Twitter, Kudrin said he “is holding consultations on uniting democratic and liberal forces to establish a new party.” The former minister said he was considering a number of options, including leadership of a new party, but that he would hold talks with other political forces first, including with billionaire presidential candidate Mikhail Prokhorov.

Prokhorov said that if he wins the election he might name Kudrin or jailed tycoon Mikhail Khodorkovsky as his prime minister. Prokhorov also plans to establish a new party that he will head himself if he gets more than 10 percent of the vote. If he gets less than 10 percent, he would ask someone else, perhaps Kudrin, to head the party.