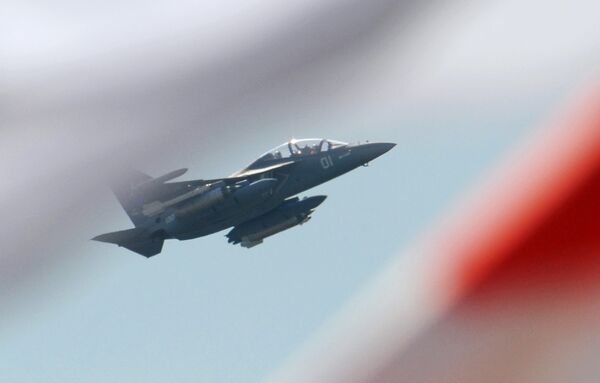 U.S. Assistant Secretary of State Jeff Feltman will request Russia to comment on the recently signed contract to sell combat trainer jets to Syria during his visit to Moscow, the U.S. Department of State Said.

U.S. Assistant Secretary of State Jeff Feltman will request Russia to comment on the recently signed contract to sell combat trainer jets to Syria during his visit to Moscow, the U.S. Department of State Said.

The Kommersant daily quoted on Monday a source close to Russia’s state arms exporter Rosoboronexport as saying Russia and Syria had signed a $550-million contract on the delivery of 36 Yakovlev Yak-130 Mitten combat trainer in late December.

“Well, we’ve seen the same press reports that you’ve seen. Obviously, if it’s accurate, it would be quite concerning,” Spokeswoman Victoria Nuland said. “And issue number one on his agenda there is Syria… So I’m sure that Jeff will be raising these concerns as well.”

Russia has opposed international sanctions, including an arms embargo, against Syria, where the death toll from clashes between protesters and government troops has reached 5,400, according to the United Nations.

Earlier this month, the United States expressed concerns over weapons deliveries to Damascus following media reports about a Russian ship loaded with arms docking in the Syrian port of Tartus.

Nuland said Russia is yet to provide any official information on the ship and its cargo.

“I don’t think we’ve seen anything but press reports at this moment,” she said.

“We did raise our concerns with the Russians at every level. We’ve raised it a number of times. With regard to this latest incident, we’ll obviously be inquiring about it,” the spokeswoman went on.

Without explicitly confirming the report of the arms shipment, Russian Foreign Minister Sergei Lavrov said last week Russia was not going to justify its actions before the West because it was not violating “any international agreements or any [UN] Security Council resolutions.”

The cargo ship MV Chariot, flying the St. Vincent and Grenadines flag, was en route from St. Petersburg to the Syrian port of Latakia when it was briefly held and inspected in the Cypriot port of Larnaka on suspicion that it carried weapons.

The vessel was allowed to leave the port in about an hour, after the ship crew announced it would change its destination and not go to Syria. Turkish media said a day later that the ship docked in the Syrian port of Tartus.