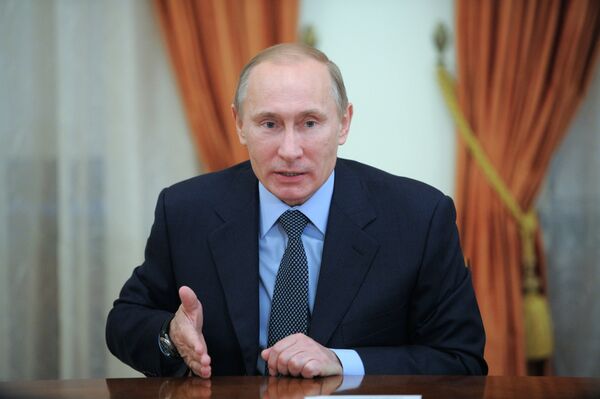 Prime Minister Vladimir Putin combined on Monday a stark warning that rising nationalism poses a threat to Russia’s very future with calls for a clampdown on “disrespectful” internal migrants.

“Attempts to advocate the idea of the creation of a mono-ethnic, national Russian state contradict our millennium-old history,” Putin wrote in an article published on his official website.

“This is the shortest path to both the destruction of the Russian people and Russia’s sovereignty,” he added in his second election campaign article ahead of his bid to win a third presidential term at March 4 polls.

He also proposed the creation of a new state agency on national development and interethnic accord.

Russia has seen a dramatic rise in ultra-nationalist sentiments since the break-up of the Soviet Union, with far-right movements prominent at recent mass protests against alleged vote fraud in favor of Putin’s ruling United Russia party.

Some 5,000 nationalists rioted near Red Square in December 2010 after the murder of a Spartak Moscow football fan by a youth from the volatile, mainly Muslim North Caucasus region.

And Putin sought to spin both sides of the nationalist coin with the promise of a crackdown on “aggressive, provocative and disrespectful” internal migrants who fail to respect “the customs of the Russian people.”

‘This behavior should be met with a legal, but harsh response,” he said.

Tensions between ethnic Russians and natives of North Caucasus republics are frequently exasperated by deep cultural and religious differences, despite the drawing up by officials of behavior guidelines for new arrivals in big cities from republics such as Chechnya and Dagestan.

Putin has faced frequent criticism over the government’s generous financing of the economically depressed and violence-ridden North Caucasus region. Opposition figurehead Alexei Navalny, one of the organizers of the recent vote fraud protests, has lent his backing to the grassroots, nationalist “Stop Feeding the Caucasus” campaign.

But Putin dismissed such campaigns as a danger to Russia’s national unity.

“When they start shouting ‘Stop Feeding the Caucasus’ a call will inevitably follow to ‘Stop Feeding Siberia, [Russia’s] Far East, the Urals…” he wrote. “This was exactly the recipe followed by those who instigated the break-up of the Soviet Union,” he added in Monday’s article, which was also published in the Nezavisimaya Gazeta broadsheet.

Putin also warned that the creation of nationalist parties in Russia’s republics was “a direct path to separatism.”

But the prime minister recognized the concerns of many ordinary people over “mass immigration” from impoverished former Soviet republics such as Tajikistan and Kyrgyzstan and vowed to make the violation of Russia's residency registration laws - including for internal migrants - a criminal offense.

He also promised that from next year immigrants would have to pass exams testing their knowledge of the Russian language, as well as the country’s history, and literature.

“Internal registration is part of the Soviet legacy, of the police state,” Masha Lipman, a political analyst at the Carnegie Moscow Center think-tank, told RIA Novosti. “This places limitations on the movement of people within the country and is certainly not in spirit with the constitution.”

She also suggested that the Soviet-era deportations of entire ethnic groups such as the Chechens and the Ingush had laid the foundations for today’s “ethnic crime and xenophobic sentiments.”

“Tolerance is not part of the Soviet legacy,” Lipman added. “And this is not mentioned at all in Putin’s article. He says we should teach migrants more about Russian history and values, but I don’t think he can be a moral authority on Russian values as he is so evasive about the Soviet period.”

Speaking later on Monday at a discussion on ethnic issues in the North Caucasus spa town of Kislovodsk, Putin said the Soviet Union was free of inter-ethnic conflicts.

He also called on North Caucasus elders to "educate" their young people before they headed to Moscow and other large cities with an ethnic Russian majority, noting that their "attitudes to local customs and local culture" frequently provoked "irritation."

Putin is seeking to return to the Kremlin after being barred by the constitution from standing for a third consecutive term in 2008. State-pollster VTsIOM indicated last week that his support among voters had risen from 45 percent earlier this month to 52 percent – just enough to give him victory in the first round of the elections.