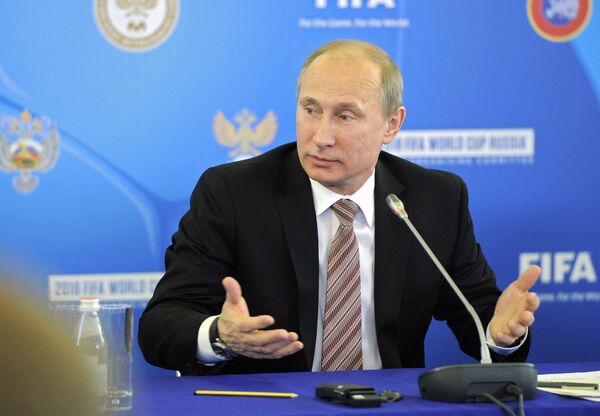 Prime Minister Vladimir Putin began courting sports fans as part of his presidential campaign, seeing them both as a potential constituency and a threat, analysts said Friday.

Prime Minister Vladimir Putin began courting sports fans as part of his presidential campaign, seeing them both as a potential constituency and a threat, analysts said Friday.

Putin held a lengthy meeting with representatives of several football fan clubs on Thursday, fielding an extended Q&A session that was concluded with beer and crawfish.

The prime minister promised, among other things, to pressure air carriers for free travel for fans during the 2012 Euro Cup in Ukraine and Poland and to consider reintroducing now-banned beer sales during football matches.

He also cracked his trademark laddish jokes, proposing during a discussion on education reform that the fans "give a good thrashing" to Sergei Fursenko, head of the Russian Football Union and brother of Education and Science Minister Andrei Fursenko, whom Putin addressed as "bro."

Emelianenko, a member of Putin's United Russia party and a regional legislator, never elaborated on his duties. Repeated calls to Putin's campaign staff in Belgorod went unanswered on Friday.

Emelianenko's promoter Vadim Finkelstein said by telephone that the champion, who is on a break until the end of spring, "will definitely support Putin, also a former athlete," but could not elaborate. Putin is a longtime judo enthusiast.

In November, a crowd of some 20,000 people erupted into catcalls when Putin took the stage in Moscow after a Emelianenko fight, looking to congratulate him with his victory. Some media speculated Putin was the target of the boos, though his supporters said they were aimed at Emelianenko’s opponent who was leaving the stage at the same time.

Protest rallies in December, which saw tens-of-thousands taking to the streets, were peaceful but Belkovsky said football fans, known for their aggression and organization, could change that.

A mixed crowd of some 6,500 football fans and nationalists clashed with police on Moscow’s Manezh Square after Spartak Moscow fan Yegor Sviridov was killed in a brawl with North Caucasus natives in 2010. Putin personally laid flowers at Sviridov’s grave days after the riots, also accompanied by football fans.

"Fans don't like him but it's depoliticized love for now," Belkovsky said by telephone. He pointed out that football fans are known for their nationalist views and that the nationalist community in the country is generally anti-Putin. Many nationalist leaders participated in December's street protests.

Putin's strategy for the presidential elections in March is to personally court various groups of voters, from sports fans to fishing enthusiasts, relying on his charisma, said Alexei Makarkin of the Center for Political Technologies.

"Sports fans are a tricky constituency due to their nationalistic leanings," he conceded. "But they are a non-political community first and foremost."

By courting the fans, Putin is also sending a message to non-radical nationalists, showing them he is paying attention to them, Makarkin said.

He said the organized sports communities are not important for the polls, numbering only tens of thousands of members.

"But there are also the unorganized fans for whom it's an important element of their identity," Makarkin said. "And their count stands in the millions."