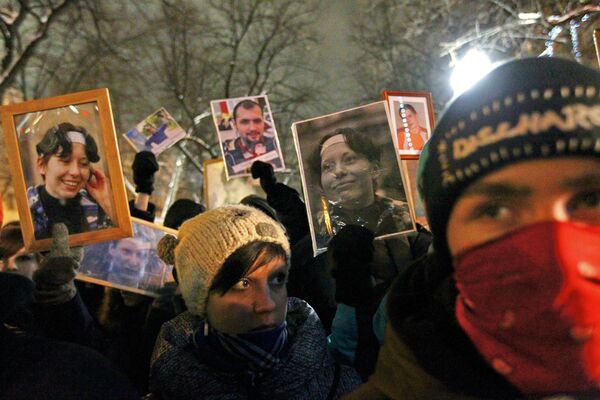 Hundreds of people took part in an anti-fascist rally in snowy downtown Moscow on Thursday to mark the third anniversary of the murders of a human rights lawyer and an opposition journalist by nationalists.

Hundreds of people took part in an anti-fascist rally in snowy downtown Moscow on Thursday to mark the third anniversary of the murders of a human rights lawyer and an opposition journalist by nationalists.

“Russia is for everyone!” chanted a crowd of what police said was some 800 people. The chant was a counter to the nationalist slogan “Russia for Russians!”

Two nationalists were jailed last year over the 2009 shootings in the Russian capital of lawyer Stanislav Markelov and Novaya Gazeta journalist Anastasia Baburova, whose deaths made international headlines.

Thursday’s march to Pushkin Square, just a short walk from the Kremlin, was attended by opposition leaders including Grigory Yavlinksy, head of the liberal Yabloko party, and Sergei Udaltsov of the Left Front movement.

“The manifestation of fascism, Nazism and extreme forms of nationalism is more dangerous for Russia than any other European country,” Yavlinksy told RIA Novosti. “A declaration that fascists will not pass is therefore extremely vital.”

There were no arrests at the authorized rally, although police said the organizers may face charges after almost three times the permitted number of participants showed up.

“It is impossible to defeat fascism, but it is necessary to struggle against it, all the same” pensioner Marina Valentinova said. Behind her, a placard featuring photographs of Markelov and Baburova read: “Russia always kills its best – why?”

Russia has been plagued by right-wing violence in the years since the collapse of the Soviet Union. Last year, at least 37 people of "non-Slavic appearance" were murdered by extremists across Russia, according to statistics complied by the SOVA organization, which monitors race-hate attacks in the country.

The rally was also attended by a number of migrant workers from former Soviet republics such as Uzbekistan and Tajikistan. Nationals of these impoverished Central Asian states are often victims of race-hate attacks in Russia, with the most horrific example being the beheading of a Tajik national near Moscow in 2008.

“This is the first time migrants have come out to show solidarity with anti-fascist groups,” Kyrgyz journalist and activist Aida Kasymaliyeva told the crowd as temperatures dropped to minus 10 degrees Centigrade (14 degrees Fahrenheit.). “For them, this is not a matter civil rights or democratic values – this is a matter of survival.”

A number of rally participants were sporting the white ribbons that have been adopted by protesters against alleged electoral fraud in favor of Prime Minister Vladimir Putin’s United Russia party.

Rights activists warned on Thursday, however, that the vote fraud protest movement was in danger of being discredited by the involvement of ultra-right groups.

“Compromise with nationalists, no matter how moderate they may seem, is unacceptable,” anti-fascist activist Dmitry Gorodov told the crowd.

Anti-fascist rallies also took place on Thursday in around a dozen other Russian cities. Regional media outlets said nationalists had attacked protesters in the northern city of St. Petersburg and the central Russian city of Voronezh, but there were no reports of serious injuries.