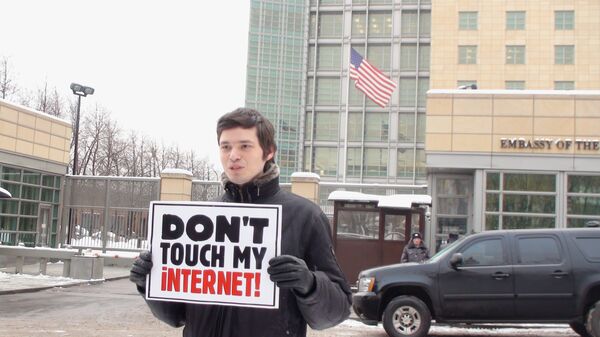 Russia's tiny but vocal Pirate Party on Wednesday joined the global campaign against anti-piracy bills in the U.S. Congress saying they will jeopardize Russia’s emerging internet-dependent democracy and infringe on internet freedom.

Russia's tiny but vocal Pirate Party on Wednesday joined the global campaign against anti-piracy bills in the U.S. Congress saying they will jeopardize Russia’s emerging internet-dependent democracy and infringe on internet freedom.

“If these bills are adopted, U.S. judges would get the legal right to block the Russian social network Vkontakte as internet pirate №1, as well as Twitter and Facebook,” Pirate Party member Sergei Kolennik, 26, said.

A dozen party members attempted to stage a rally near the U.S. embassy in Moscow but were prevented by police, who detained two. However, the activists managed to pass a petition to U.S. Ambassador Michael McFaul through the embassy’s post office.

“We ask you not to remain indifferent but to convey to the U.S. public and government how important it is for the democratic future of Russia to save the freedom of internet,” the petition said.

It also cited the case of the Lopukhovs, who in 2007 set up the torrent tracker interfilm.ru to share movies and music. The couple is now facing a six-year prison term and the Russian Anti-Piracy Society (RAPO) has estimated the damage caused by their actions to film companies at $1 billion.

Hundreds of web resources all over the world, including English-language Wikipedia, blog-hosting site WordPress, social-media news site Reddit and the web page of the Pirate Party of Russia went dark on Wednesday in protest of the Stop Online Piracy Act (SOPA) and Protect IP Act (PIPA) which are currently under discussion in the U.S. Congress.

The U.S. bills are intended to crack down on online movie and music piracy by blocking access to web resources thought to contain unauthorized copyright material and have already stirred serious discontent from web giants and internet users.

The music and film industries have backed the controversial bills, but Google, Facebook and Twitter have said the proposed measures represent a serious threat to innovations in the web industry.

A prominent Russian intellectual property lawyer Svetlana Kokina said that even if SOPA and PIPA are adopted, this will not strongly impede internet piracy.

“In my view, it’s impossible to tackle internet piracy; several attempts have already been made and they failed,” she said, adding that governments should rather come up with a legal framework to regulate internet piracy, as has been done with prostitution in several countries.