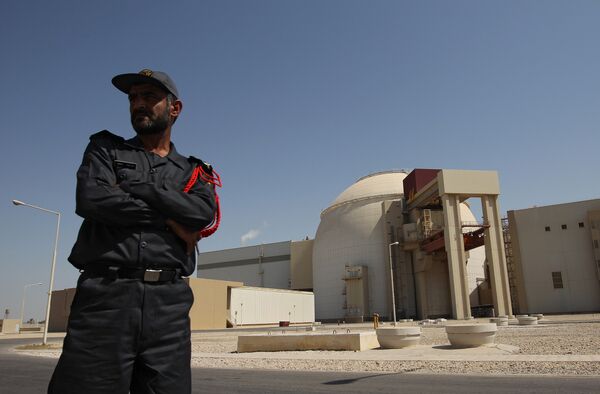 © RIA Novosti . Valery Melnikov
/
Go to the photo bank
Subscribe
An attack on Iran by Western powers could cause an unpredictable “chain reaction” throughout the region, Russia’s foreign minister warned.

An attack on Iran by Western powers could cause an unpredictable “chain reaction” throughout the region, Russia’s foreign minister warned on Wednesday.

“It is impossible to list all the consequences [of an attack],” Sergei Lavrov said in an annual address. “But I have no doubt that it would pour oil on the still smoldering fire of Sunni-Shia confrontation, which would lead to a chain reaction.”

"As for how likely such a catastrophe is, you need to ask those who constantly mention this as an option," he added. Lavrov also said that Russia would “do everything” in its power to prevent an attack on Iran.

Although Israeli Defense Minister Ehud Barak said on Wednesday that Israel was "very far off" from taking the decision to strike Iran, Washington and Tel Aviv have refused to rule out military force against Tehran over suspicions that its nuclear program is aimed at the production of atomic weapons.

Iran, which recently began enriching uranium at an underground bunker, denies it is seeking nuclear arms and says its program is to provide peaceful civilian energy.

Lavrov also said that sanctions on Iranian oil exports being discussed by the European Union would “hurt” ordinary people and were more about stirring up unrest than nuclear non-proliferation.

"This has nothing to do with a desire to strengthen nuclear non-proliferation," he said. "It's aimed at stifling the Iranian economy and the population in the apparent hope of provoking discontent."

Sanctions would also prove “an obstacle” to the revival of a dialog between Iran and the six world powers involved in negotiations on its nuclear program, Lavrov said.

Oil exports make up some 80 percent of Iran’s foreign revenues and Tehran has threatened to close the Strait of Hormuz, the export route for one third of global seaborne traded oil, in response to sanctions.

U.S. Defense Secretary Leon Panetta has said such a move would provoke a response.

“Russia has practically no real influence left in the Middle East,” analyst Sergei Demidenko of the Moscow-based The Institute of Strategic Studies and Analysis told RIA Novosti.

“Iran can not rely on Russia to defend it. The U.S. and Israel are certainly not afraid of this. Russia will definitely not go to war over Iran.”

Another analyst suggested Russia’s reluctance to antagonize Iran was partly linked to fears that Tehran could finance and support the ongoing Islamist insurgency in its volatile North Caucasus region.

“No one needs an Iranian nuclear bomb…but we do not need Iran to attack Russia’s interests in the North Caucasus either,” Yevgeny Satanovsky of the Institute of Middle Eastern studies told RIA.

“It would be very easy for Iran to organize something like Hezbollah in south Lebanon on Russian territory, if Moscow supported an attack,” he said.