Russia’s Communists join forces with radicals ahead of polls 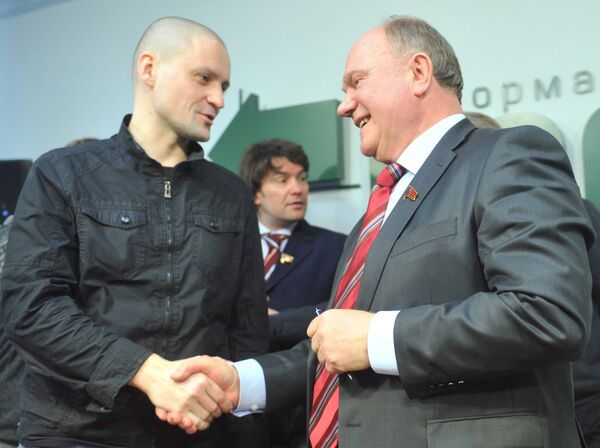 © RIA Novosti . Alexandr Utkin
Subscribe
Russia’s Communist Party entered into a pact on Tuesday with the radical Left Front movement in a striking show of unity between two generations of opposition forces in the run-up to March’s presidential polls.

Russia’s Communist Party entered into a pact on Tuesday with the radical Left Front movement in a striking show of unity between two generations of opposition forces in the run-up to March’s presidential polls.

“This is a historic and important moment,” Left Front leader Sergei Udaltsov said as he signed an agreement that will see his movement support veteran Communist Party head Gennady Zyuganov’s bid to prevent Prime Minister Vladimir Putin securing a third stint in the Kremlin.

In return, Zyuganov pledged to implement the demands drawn up by the organizers of recent mass protests against alleged electoral fraud at last December’s parliamentary polls if he become president.

These demands include a rerun of the polls before the end of the year, the dismissal of the unpopular election chief, Vladimir Churov, and “fundamental” changes in electoral law.

“We risk a split unless left forces rally around a single candidate,” Udaltsov said. “We are placing our stake on Gennady Zyuganov.”

The Left Front leader also said that Zyuganov, who enjoys the support of 10 percent of Russians, according to a survey carried out last week by the state-run VTSiOM pollster, was the opposition candidate “most likely” to defeat Putin at the polls. Nationalist Vladimir Zhirinovsky, head of the Liberal Democratic Party, is Zyuganov’s closest opposition rival on nine percent.

The same survey indicated that 45 percent of voters backed Putin, a figure that would not be sufficient for a victory in the first round.

The alliance is the first time that one of Russia’s long established opposition parties has openly cooperated with a radical movement such as Left Front, one of a number of confrontational groups outside of the political mainstream.

Zyuganov, 67, and Udaltsov 34, made for odd allies as they attended a news conference in downtown Moscow to conclude the deal, with the former’s suit, tie and Communist Party pin in sharp contrast to the young activist’s black top, jeans and shaven head.

The Communist Party leader has long been criticized over his inability – or reluctance – to offer more than token opposition to Putin and his United Russia party. He also spoke out against the initial wave of protests that hit Russia in the wake of December’s polls.

Udaltsov, in comparison, is a rising star of Russia’s newly revitalized political opposition and spent most of December in jail on protest related charges. He went on hunger strike while behind bars to draw attention to what he says is his persecution by the authorities and still looked gaunt as he appeared at Tuesday’s news conference.

But this unlikely alliance contains advantages for both sides, said analyst Alexei Makarkin at the Center for Political Technologies.

“Zyuganov gets access to Sakharov Avenue,” he said, making reference to the venue for December’s 50,000-plus strong protest rally in Moscow, “while Udaltsov receives the support of a powerful organization.”

Sergey Mikheyev of the Center for Political Assessment told RIA Novosti that the deal was a sign that Zyuganov recognized the extent of popular discontent among the educated urban electorate.

“He is seeking to attract new voters, as he has almost no way otherwise of reaching out to young people,” he said.

Zyuganov traditionally enjoys the support of older voters and inhabitants of rural areas, rather than the Internet-savvy urbanites who have been the driving force behind the recent protests.

Despite attempts to present a united front at the signing of the deal, there was a marked difference in the rhetoric of the two left-wing groups.

While Zyuganov was careful to stress his party’s adherence to “peaceful, organized and disciplined” opposition to Putin’s rule, Left Front members were less willing to ease concerns of possible unrest around March’s crucial vote.

Left Front activist Alexei Sakhin said that while his movement also hoped for the “non-violent dismantling of Putin’s regime” Russia could find itself “engulfed in civil war” if the authorities came down hard on protesters.

There were also signs of early discord between the two sides. It had been announced by Left Front on the eve of the meeting that Zyuganov could agree to become president for a two-year “transitional period” in the event of his victory in the polls, but Udaltsov said on Tuesday that negotiations would continue on the issue.

Analysts expressed doubts on Tuesday that the alliance would prove long lasting and predicted that Zyuganov and the Communists would soon return to their comfort zone of state-sanctioned opposition.

“Zyuganov has been influenced by members of his circle in this alliance with Left Front and Udaltsov,” Alexei Mukhin, director of the Center for Political Information think tank, told RIA Novosti.

“But he now risks losing his more traditional supporters and will quickly return to his previous position,” he went on, adding that the Communist Party leader’s apparent newfound radicalism was mere “show.”

“This alliance will not even be short lasting,” he said. “It will be over in an instant.”