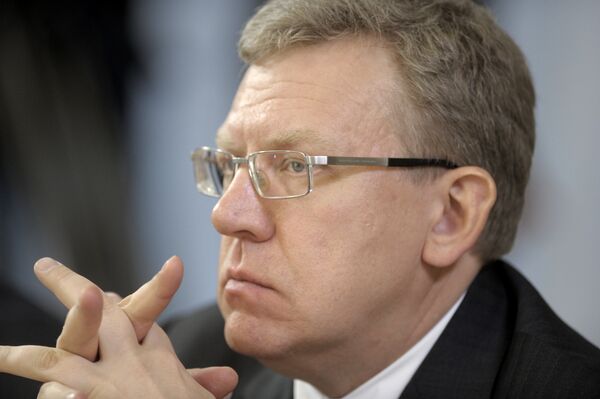 © RIA Novosti . Sergey Guneev
/
Go to the mediabank
Subscribe
International
India
Africa
Russia's former finance minister Alexei Kudrin, who put in an unexpected appearance at the December 24 rally in Moscow, called on the opposition on Monday to engage in dialog with the authorities.

Russia's former finance minister Alexei Kudrin, who put in an unexpected appearance at the December 24 rally in Moscow, called on the opposition on Monday to engage in dialog with the authorities.

Kudrin, a long-time ally of Russian Prime Minister Vladimir Putin, said that maintaining the status quo was “dangerous” and suggested that the opposition and the authorities each made a step towards the opposing party “to end the deadlock.”

The former finance minister, who lost his job last September over disagreement with President Dmitry Medvedev on key issues, appeared at a demonstration on December 24 against alleged vote-rigging in parliamentary elections but was booed by some protesters.

The ex-minister, who has repeatedly called for a dialog between Russian leaders and the opposition, advised the organizing committee of the “For Fair Elections” rally to “take a more formalized approach” by choosing negotiators and agreeing on an agenda.

“The organizing committee should take a more formalized approach to the negotiations: lay down the agenda suitable for all sides, choose representatives and give them official status, involve official representatives of parliament opposition in the process,” he said.

The authorities, in their turn, “should clearly demonstrate their readiness for a dialog with this working group,” the ex-minister said.

Kudrin said that his recent contacts with the opposition and the authorities revealed that both sides lack the understanding of how necessary such talks are.

“This suits “hardliners” on both sides but will never satisfy those who prefer a rational approach,” Kudrin said.

Tens of thousands of people rallied in Moscow and other cities on December 24, Russia’s largest protests in decades, to demand a rerun of the parliamentary vote. Demonstrators have been calling for fresh polls over alleged vote fraud in favor of the ruling United Russia party, led by Prime Minister Vladimir Putin.