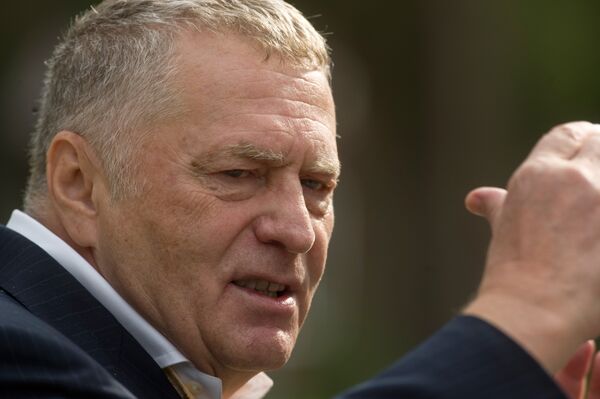 Russian presidential candidate Vladimir Zhirinovsky said on Monday that Prime Minister Vladimir Putin should decide against returning to the post of the country’s president as it is not accepted in the civilized world.

Russian presidential candidate Vladimir Zhirinovsky said on Monday that Prime Minister Vladimir Putin should decide against returning to the post of the country’s president as it is not accepted in the civilized world.

“No one can be the head of the country for more than two terms. With the exception of Argentina, former presidents do not return to their posts as it is unbecoming and means that [he] does not want to give up his power,” Zhirinovsky said at a news conference.

The populist firebrand and the leader of the ultra-right Liberal Democratic Party (LDPR) said it would be harmful “when the very same person will be looking at us for six more years and telling us how we must live.”

The 65-year old politician said the ruling tandem of Putin and President Dmitry Medvedev “will not give away their power to the opposition,” as they have an intention of keeping it until 2030.

Zhirinovsky, running against Putin in the March 4 presidential election, said his campaign slogan will be “Zhirinovsky or it will be worse” and promised early elections to the Russian lower house of parliament, the State Duma, in May next year if he is elected president.

“We support all the demands of the opposition of any kind. We promise to hold early elections in May next year,” he said.

He said his LDPR party considers all elections in the past 22 years as illegitimate and fabricated and was surprised that mass protests only erupted after the recent parliamentary elections in December.

“Why did you not hit the streets after June 12, 1991, when [late Russian President Boris] Yeltsin did not gain the votes that were attributed to him?” he said adding that all the following elections in Russia were falsified and that is why “there is such a complete mess in the country.”