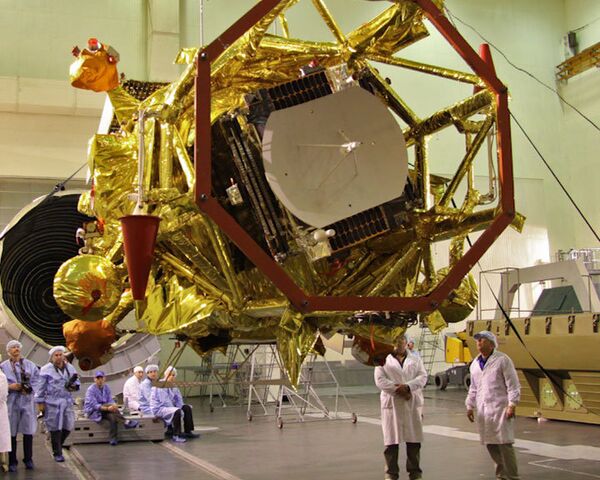 Doomed Russian Phobos-Grunt Mars probe that's been stuck in Earth orbit for two months has crashed down in the Pacific Ocean on late Sunday.

Doomed Russian Phobos-Grunt Mars probe that's been stuck in Earth orbit for two months has crashed down in the Pacific Ocean on late Sunday.

"Phobos-Grunt fragments have crashed down in the Pacific Ocean," Russia's Defense Ministry official Alexei Zolotukhin told RIA Novosti, adding that the fragments fell in 1,250 kilometers to the west of the island of Wellington.

As of 20.15 Sunday, the spacecraft was moving in the near-Earth orbit with an altitude that varied between 113.8 km at perigee and 133.2 km at apogee, the Russian space agency Roscosmos said.

The head of Roscosmos, Vladimir Popovkin, previously said the probe would break up during reentry into the atmosphere and none of the fragments are likely to reach the Earth.

That includes the 13.5-tonne spacecraft’s 7.5 tons of fuel, which are stored in aluminum tanks that are bound to explode upon reentry.