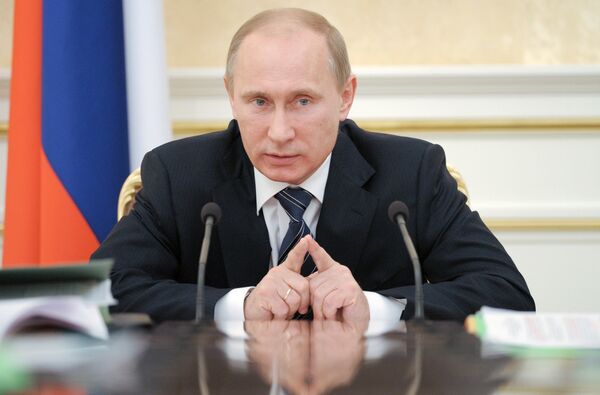 Vladimir Putin’s draft election program, published on his website Thursday, is the biggest piece in the campaign puzzle that presidential candidates started working on after the New Year holiday.

Vladimir Putin’s draft election program, published on his website Thursday, is the biggest piece in the campaign puzzle that presidential candidates started working on after the New Year holiday. Their goal is to win over new voters without losing the older segment of the electorate. Which group are Putin’s promises meant for?

The prime minister, who is expected to announce his full program next week, offers a carrot to each of the key social groups, including pensioners, members of the military, teachers and small businesses. One promise targets a very specific subset of voters who fear imprisonment (“reduce the application of sanctions such as pre-trial detention and imprisonment for misdemeanors”).

Putin’s support comes from a diverse coalition of voters that have one thing in common: wariness of change.

“Putin supporters make up a large, well-defined and rather loyal group,” said Alexei Makarkin, vice-president of the Center for Political Technologies. “The major problem is that the loyalty and caution of his supporters prevent them from embracing modernization wholeheartedly. Putin says in his program that the old economic model based on natural resources has exhausted its potential. We need modernization, but to implement it we must rely on modernizing forces.”

These three candidates believe these voters can be found among pro-democracy protesters, the scientists and engineers who look up to the West, as well as opposition bloggers. In short, they are fishing among the angry and dissatisfied, as there are many more of them than participants of protest rallies.

Each of the three has made his first attempt this week.

Billionaire Mikhail Prokhorov has found an apt metaphor to capture the sentiments of the “new angry”, a term coined by political analyst Alexei Chaadayev to denote successful young people who took part in protest rallies. “They go to the market and they see they have a choice of what flavor of ice cream to buy, what brand of coffee to drink, but they do not have this same choice of political leadership, and they want it,” Prokhorov writes in an article in the Guardian. “Russia needs to change – but by evolution not revolution.”

He believes that the future lies with this new bloc of voters, just as the future belongs not to greasy spoons that serve the same few dishes for breakfast, lunch and dinner, but to restaurants with diverse menus.

Even Zyuganov feels that you can no longer score points with the same clichés and has proposed constitutional reform in his program, which he published before Putin. Reforms include a return to the direct election of governors, extending the period in which the media can cover election campaigns, and stiffer punishment for falsifying election results.

In a surprising twist, this “true Leninist” has promised as president to release former billionaire Mikhail Khodorkovsky from prison and to give liberals and anyone else the right to speak at the Communist Party’s planned January 21 rally, “For citizens’ right to honest elections and a decent life.”
However, experts say that Zyuganov has not undergone a democratic transformation. Rather, it is little more than a clever (or not so clever) ploy.
“Communists espoused democratic values before, but only until they came to power,” Makarkin said. “Zyuganov understands the public mood. He has moved these values from the very bottom to nearly the top of the Communist Party’s agenda: he feels that this is what he needs to do now.”

Putin is so far staying out of this auction of new liberties, and ceding the floor to his rivals. His press secretary, Dmitry Peskov, said that Putin would not take part in presidential debates. However, he suggested that Putin’s representatives could take his place, as the government obviously cannot ignore this “trend of the season.”

Putin intends to wage the main electoral battle on the economic field, offering practical solutions to the problems that concern every voter, such as a fair tax policy and the “protection of basic morals in the media and online.”

It all sounds very good, but working against Putin’s message is his role in the ruling tandem and his two previous presidential terms. Why have the media been broadcasting and publishing outrageous things about anything and everything except the powers that be? Why do the poor have to pay the same income tax rate as the rich? What stopped Putin from implementing his current program before?

The prime minister is now fighting to keep his traditional electorate and to bring supporters he has lost to the left-wing parties of Zyuganov and Mironov back into the fold. This explains the social-democratic nuances in Putin’s program, in particular the phrase “freedom must be based on justice.” But winning back these voters will be a big challenge.