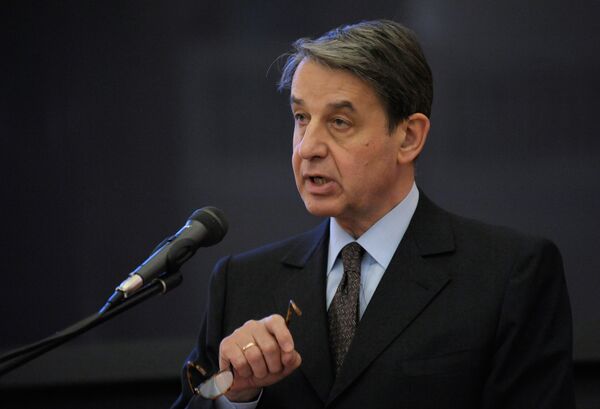 © RIA Novosti . Grigoriy Sysoev
/
Go to the mediabank
Subscribe
International
India
Africa
U.S. claims to the Schneerson library are provocative and spoil cultural ties with Russia as the sacred Jewish books are the unalienable property of the country, Russian Culture Minister Alexander Avdeyev said on Friday.

U.S. claims to the Schneerson library are provocative and spoil cultural ties with Russia as the sacred Jewish books are the unalienable property of the country, Russian Culture Minister Alexander Avdeyev said on Friday.

The Schneerson Library is a collection of books and religious documents assembled by the Chabad-Lubavitch Hasidic movement over two centuries prior to World War II in Belarus. It is one of the main Jewish religious relics.

Part of the collection amassed by Lubavitcher Rebbe Yosef Yitzchok Schneerson was nationalized by the Bolsheviks in 1918. Later, about 25,000 pages of manuscripts fell into the hands of the Nazis, and were later seized by the Red Army and handed over to the Russian State Military Archive. This part of Schneerson's Library is now kept in the archive of Lenin’s Library in Moscow.

The other part was taken out of the Soviet Union by Schneerson, who emigrated in the 1930s.

Since 1991, the year of Schneerson's death, leaders of the Brooklyn-based Orthodox Jewish movement have been trying to regain possession of the library, saying that it was illegally held by the Soviet authorities after the war.

In 1991, a court in Moscow agreed to turn over the library to Chabad. After the Soviet Union collapsed, the ruling was ignored. The Russian government now says it wants to keep the archive for future scholars.

In 2010, a court in Washington confirmed the American Jewish community’s right to the library, but Russia called the court’s decision illegitimate. In late 2011, a U.S. court ruled that Russia must return about 12,00 books and 50,000 manuscripts from the library.

"The library forms part of the Russian library reserve and is inalienable. The history of its claiming by U.S. plaintiffs appears to us provocative," Avdeyev said at a press conference.

The request by U.S. plaintiffs "aims to spoil the bilateral relations between our countries and to undermine the political reset," the culture minister said.

The complex legal dispute over Schneerson Library is causing Russian art institutions to cancel scheduled loans of world-renowned artworks to U.S. art institutions. It has already turned into a full-scale diplomatic feud between the United States and Russia.

“Only when the 2011 decision of the U.S. court is set aside will a dialogue become possible,” Avdeev added.