Putin says no to participation in TV presidential debates 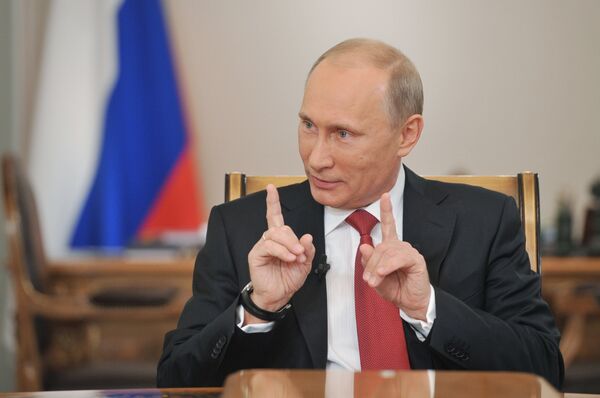 Russian Prime Minister Vladimir Putin will not take part in televised debates with rival candidates ahead of presidential elections in March, his spokesman said on Thursday.

Russian Prime Minister Vladimir Putin will not take part in televised debates with rival candidates ahead of the March 4 presidential elections, his spokesman said on Thursday.

Putin has never come face-to-face with his opponents in live debates.

Spokesman Dmitry Peskov said a commitment to take part would stop Putin "carrying out in full his duties as prime minister."

Putin served two terms as Russia’s president between 2000 and 2008, but was barred from standing for a third consecutive term by the constitution. He became prime minister after his handpicked successor, Dmitry Medvedev, became president.

While Putin is widely expected to secure the presidency in March's vote, he is facing an unprecedented crisis of popularity and analysts say it is no longer certain he will triumph in the first round of voting.

Speaking to reporters after his annual televised phone-in last month, Putin said that it would "not be a discussion on equal grounds" if he personally took part in debates.

Putin's party, United Russia, took part in debates for the first time ahead of last December's parliamentary polls. The elections were marred by widespread allegations of vote fraud in favor of United Russia.