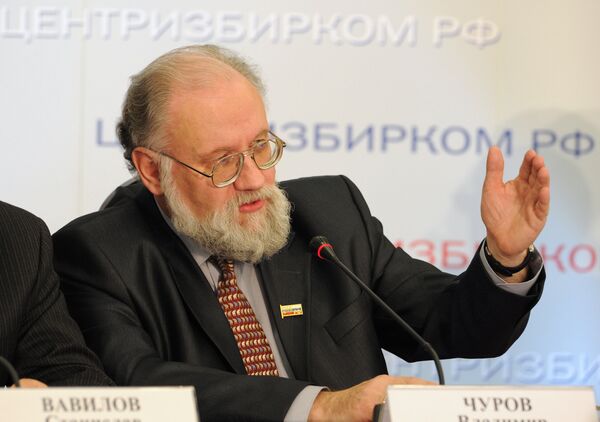 © RIA Novosti
Subscribe
International
India
Africa
About a third of Russian polling places will be fitted out with transparent ballot boxes, which will complicate ballot stuffing, the head of the country’s Central Election Commission (CEC) said.

About a third of Russian polling places will be fitted out with transparent ballot boxes, which will complicate ballot stuffing, the head of the country’s Central Election Commission (CEC) said.

“Earlier I thought we have no ways left to increase the transparency of the electoral system. Now, we are implementing a program to install transparent ballot boxes, first of all in Moscow, St. Petersburg and other big Russian cities,” CEC head Vladimir Churov told the Ekho Moskvy radio on Thursday.

The issue of the voting process transparency became particularly relevant after the December 4 parliamentary elections in Russia, when critics said the vote was rigged in favor of the ruling United Russia party and tens of thousands went out to protest, also demanding Churov’s dismissal. The authorities denied that vote irregularities affected the results but pledged to probe them.

Churov said that by the time of the March presidential election, some 60,000 transparent ballot boxes will be bought and mounted at 30,000 out of about 90,000 polling places Russia has.

He said the move was “first of all due to the fact that this time we faced, like we had anticipated, a number of provocations, when packs of fake ballots - up to 400 - were thrown into ballot boxes before the start of the vote.”

Churov said such ballot stuffing cases had been discovered in time and had not affected the vote results, adding that an investigation of them was underway.

Russia will hold presidential elections on March 4, 2012. Prime Minister Vladimir Putin, who held the presidential post in 2000-2008, is generally considered a shoo-in for a new presidential term this year.

Putin pledged in December that nearly all polling places will be equipped with webcams by the time of the presidential elections.

Churov said the webcam use technology rules out any possibility of editing video streams from polling places.