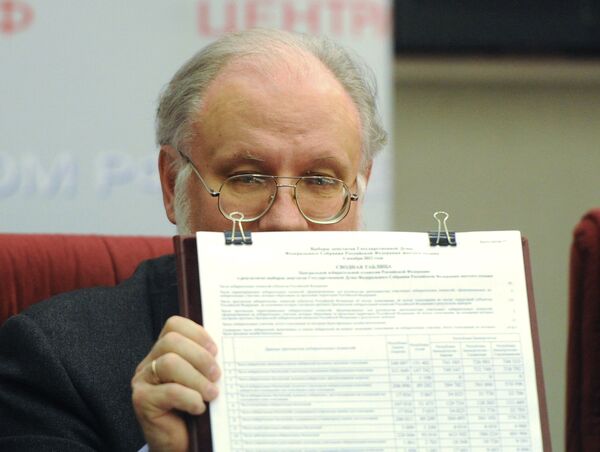 Russian Interior Ministry’s experts, who examined video clips, appearing to expose ballot-stuffing at the December’s parliamentary elections, has found layouts what could mean the clips had been edited, the head of Russia’s Central Election Commission, Vladimir Churov said on Thursday.

The December 4 elections sparked mass anti-government nationwide protests after hundreds of video clips appearing to show ballot-stuffing at the polling stations were uploaded onto the Internet.

Churov, who was severely criticized by protesters for connivance to the vote frauds, said that after checking out over 100 clips, the police experts found “the signs of the in-frame and inter-frame editing.”

“We examine each video clip both in terms of layout’s signs and relevant information [proving vote rigging]…As a rule, there is no information about any violations,” Churov said in an interview with Ekho Moskvy radio station.

The election commission chief pledged to unveil the results of the checks and said that the authors of the fake videos would unlikely be brought to responsibility since the majority of the clips had been uploaded onto the web sites that are not media outlets.

Churov’s comments will likely to spark waves of new criticism as the numerous of ordinary Muscovites, who served as the observers at the December’s polls, had already said that they were shooting everything what had happened at the polling stations without the intention to falsify the video.

Several anti-government protests have scattered across Russia, following the parliamentary elections that were allegedly marred by numerous fraud and violations in favor of the ruling United Russia party.

The next popular protest, demanding liberal reforms in Russia, is scheduled for early February, a month ahead the March presidential elections where Prime Minister Vladimir Putin views himself as the main contender.